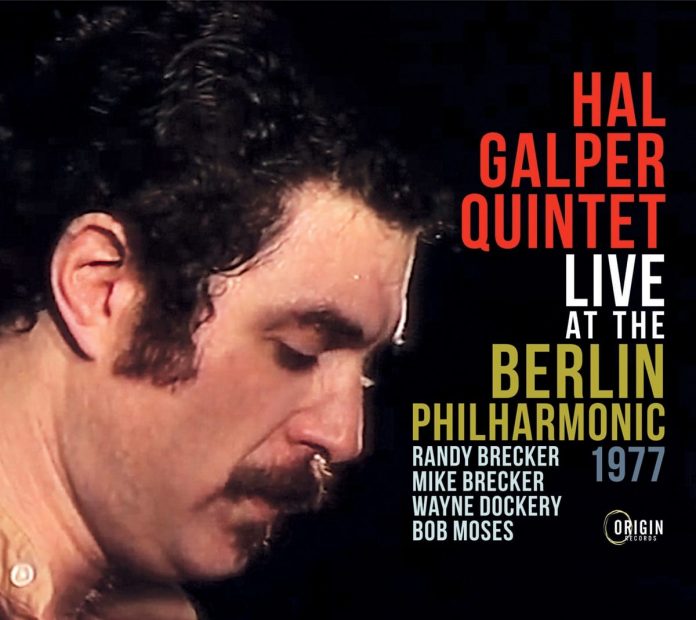 1977 was not a good year for jazz; progressive rock, heavy metal and other popular sounds were everywhere, and jazz musicians were mainly involved in playing a hybrid music with electronic instruments and a rock beat. Galper himself played electric piano in the Cannonball Adderley band but he returned to an all-acoustic line up and a hard-bop, progressive modern jazz sound for this concert at the Berliner Jazztage 77 stage.

The band were certainly up for a no-holds barred, hard-driving, full sound on this occasion. Beginning with Now Hear This, they charge out, heavy percussive piano chords supported by thunderous drums, full-on bass and convoluted solos by the Brecker brothers.

Speak With A Single voice is just as intense and runs for more than 24 minutes. Michael Brecker’s solo is comprehensive, full throttle, full of invention and over-amplified. Dockery gets a long bass solo on this track, which is also full of invention and creative lines, but it is also so over-amplified that it often doesn’t sound like a bass at all. Perhaps he needed all that amplification to be heard along with the horns, piano and drums.

I’ll Never Stop Loving you does slow down the line, but this piece was recorded at a separate Berlin concert in 1978. Randy Brecker’s trumpet lines on these selections do occasionally break out with melodic, lyrical segments which gives a little contrast. Mostly though the band here sounds like Art Blakey’s Messengers, turbo charged.

The second disc has rather more solos that sound well thought out and they certainly play for less time. This Is The Thing though runs for more than 12 minutes and ends with a drum solo where Moses plays every part of his equipment plus cymbals for a good five minutes. After thunderous applause and stomping from the audience Galper plays a gospel-inspired composition that he wrote for the Adderley band. Hey, Fool, is warm and blues based, providing a change of pace and some contrast at last.

This is high-intensity contemporary jazz played with vigour and commitment and most likely sounded better in the concert hall than on record.

Nic Jones - 16 September 2021
There's a positive air of the sampler album about this set, and at the same time the feeling of a showcase for Keefe's undoubted talents, all of which is...