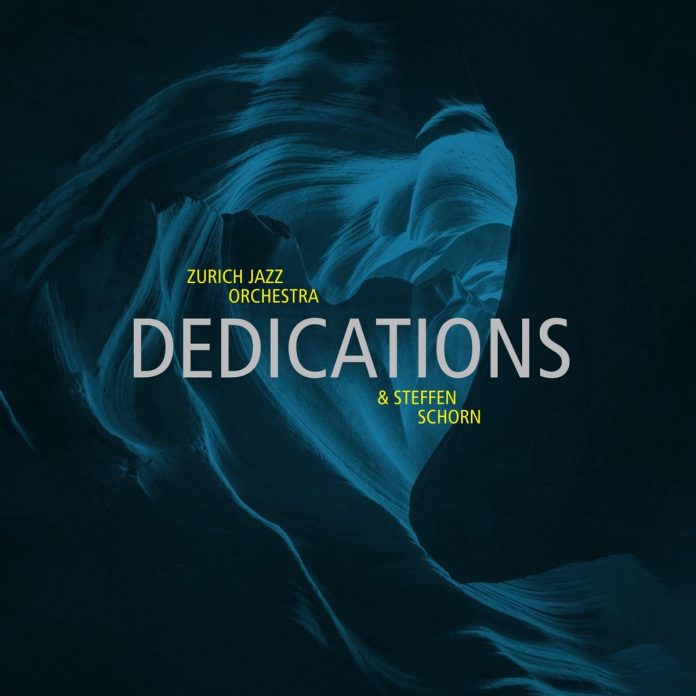 The most immediate concrete compliment I can pay the band, superbly marshalled by composer, arranger, conductor and multi-instrumentalist Steffen Schorn, is that the combined and electrifying impact of the striking, diversely rendered themes, the ultra-sharp and intelligent voicings and solos, the organic shifts in rhythm and dynamics – the overall poetics of the music – was such that it had me scratching my head and wondering: when was it that I last so enjoyed the shape-shifting swing, the kicking and stomping, the mood-rich mix of “mellowness” and “scrunching” of a big band?

Then I remembered the June 1971 Change Of Scenes – the surpassing meeting between Stan Getz and the Kenny Clarke–Francy Boland Big Band which opens with the eerie 12-tone theme of Extravagances and concludes with one of the all-time great pieces, the growling and stomping, rhythmically and chromatically thrilling Provocations. When the 39 majestic minutes of Change Of Scenes were reissued by Verve in 1999, sleeve writer Bill Kirchner spoke of “ a record for the ages”. I feel the same about the near-38 minutes of the multivalent Dedications.

With the exception of the tenderly worked ballad that is Til Charlotte, which was composed by Lars Andreas Haug, all the music was composed and arranged by Schorn (who also arranged Charlotte, its brief coda featuring him on C-melody saxophone). Like Francy Boland – who composed all of Changes Of Scenes – Schorn has a magical way of combining root jazz matters, principally swing, with fresh and invigorating qualities of harmonic movement, allied to a most subtle, often quicksilver approach to dynamics and rhythm. At times here, one could speak of a pointillist distribution of resources or of what Schoenberg called “sound-colour-melody”. But while Schorn is clearly blessed with considerable grey matter, there’s not a trace of any dry intellectualism or avant-garde aridity to the music: far from it.

Try clicking fingers and tapping toes to the multi-stranded, now whirling and building, now laid-back punch and drive of the all-too-brief opener, The Mad Code. Enjoy the pumping ostinato rhythms and shifting breadth and depth of the voicings and attack in the intriguing So Eine – or relish the mix of swing and pandiatonic structure, changing registers and mellow Caribbean flavouring which distinguishes Monsieur P F. Float high on the shimmering, reverie-rich clouds of collectively generated tone colour which constitute the yearning Martha. And then take a deep breath – and dive into the three-part, c. 13-minute wonder which is Walzer.

Part One exemplifies Schorn’s capacity to blend liquid, near-filmic themes and considerable structural, rhythmic and dynamic interest with emergent, freshly voiced swing (he has a tasty, building and blues-touched spot here, again on C-melody saxophone, followed by Raphael Kalt’s lucid, rhythmically diverse trumpet). Part Two features organically modulated, suspended or “sliding” figures and riffing and pumping blocks of interwoven tone colour; it has punchy ostinato section interchanges and spiralling climaxes, together with the most laid-back of reflective, lower register interludes and crisply sprung swing, with some nifty guitar from Theo Kapilidis, the shape-shifting whole flowing ultimately into the intimate and pianissimo coda that is Part Three.

Phew! Full details of the consistently incisive and excellent soloists are given in the CD cover’s track details. If you’re drawn to fresh, on-the-button contemporary big band music, delivered with top-quality precision and passion all round, on no account hesitate: this is the business.

Matthew Wright - 26 August 2021
This is a new band to me, although it’s apparently been on the European circuit for 30 years. As the title suggests, it is a tribute to the swing...