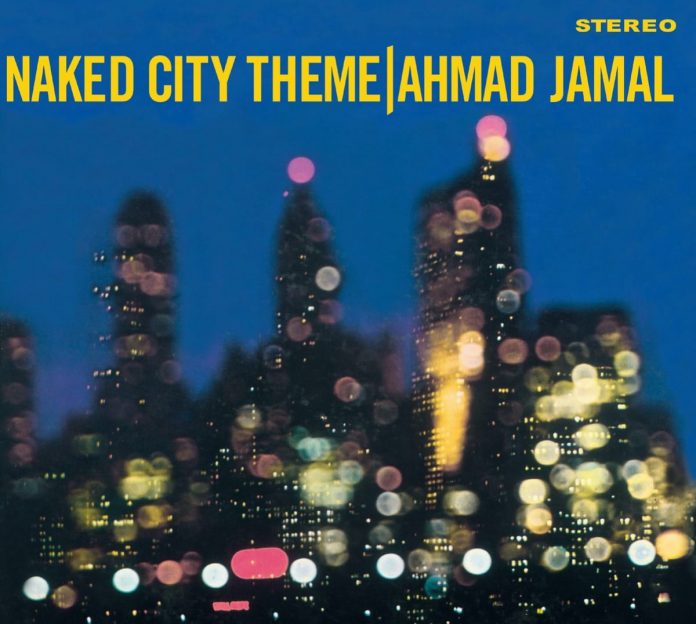 With the death of bassist Israel Crosby in 1962, the original Ahmad Jamal Trio made famous by the live Pershing sets of 1958 came to an end. Two years later, and with a new trio to hand, Jamal resumed his recording career in June 1964 with the Naked City Theme live set. Discographically, there is some confusion about when this set was recorded, as Tom Lord states that three songs – Naked City Theme, Haitian Market Place, One For Miles – were actually recorded on 10 December 1963. Sensibly, this reissue follows the information given on the original LP cover.

By the way, Naked City was an American TV police procedural drama series, broadcast between 1958 and 1963 and based on a 1948 film. The series had three opening themes, the second of which, Somewhere In The Night by Billy May, is the one Jamal plays on this set.

After Lampkin’s tom-toms kick off the title track, Jamal’s quiet intro blossoms into a robust performance, the more percussive nature of his later work making its mark here. Minor Moods showcases Jamal’s skills as a composer of waltzes, although he breaks up the composition by a good use of light and shade and some odd-bar phrases. Suleiman’s insistent bass riff makes for an interesting excursion. The exotica of Haitian Market Place is a bit forced, although Jamal’s light touch soon rescues it from cliché. The brief Beautiful Love is a beat-driven ballad. Returning some well-meant compliments, Jamal’s own One For Miles is a hard-swinging delight, faster than anything the trumpeter would or could play, a showcase for the leader’s light-fingered escapades. Lollipops And Roses ends on a high, Jamal’s shimmering piano work to the fore.

By any measure the tacked-on Extensions from May 1965 is a short album, its four tracks lasting barely 34 minutes. But its lengthy title track more than makes up for it, Jamal quietly plucking strings inside the piano before ingeniously leading the trio through 13 minutes of stop-go enthusiasm and musical daring. The returning Fournier, now back from other projects, remarked that “It’s good to be back. I missed Ahmad!” You can see why, when Jamal plays as he does here at the top of his game. The other three tracks do not match it in intensity: John Handy’s Dance To The Lady is whimsical yet intricate fun, Bob Williams’s Terrible Planet a hypnotic, bluesy excursion, while Benny Golson’s Whisper Not ends proceedings in sprightly fashion.

It’s great to have these two sets back in circulation again.

Gareth Thomas - 30 June 2021
The origins of Uneasy can be traced back to 2011, in a collaborative project of the same name (styled ‘UnEasy’), between Indian American pianist Vijay Iyer and Karole Armitage’s...