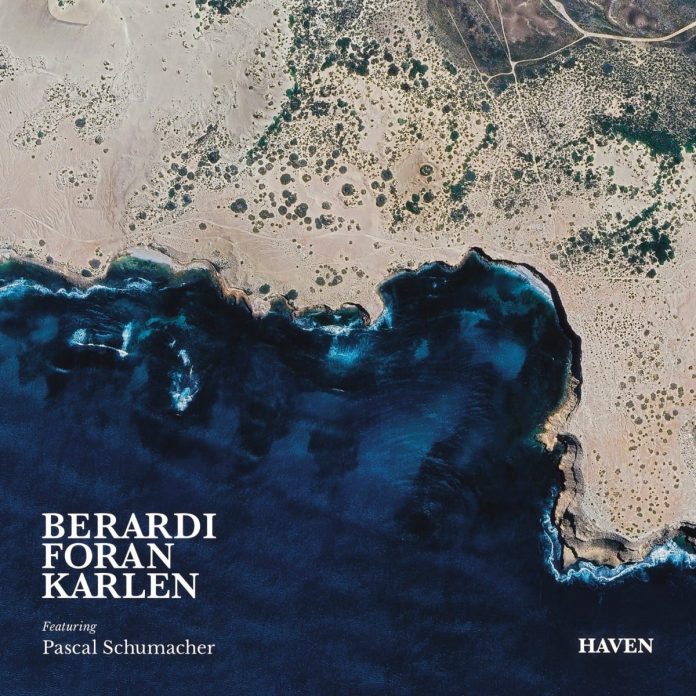 I’m an admirer of both Foran and Schumacher, so this release was never likely to escape my radar. The two are old friends, and the Luxembourger Schumacher’s quartet once shared a bill on an Australian tour with Foran’s group Trichotomy.

This 2017 set with Brisbane-based trio Berardi, Foran, Karlen was recorded during better times, a time when musicians were free to travel the globe, and with 10 new compositions and a solitary improvisation specially minted for the occasion, it proves to be an engrossing encounter.

The trio’s only previous release was 2015’s Hope In My Pocket, a jewel of an album that did much to assuage my uneasy relationship to the human voice in jazz. While I can enjoy vocalists in a range of genres spanning early blues to post-punk, the mannerisms and affectations of so many traditional jazz singers can leave me nonplussed. Singers rooted in other genres are more likely to reach me, and happily that’s the case with Kristin Berardi whose elegant singing recalls Joni Mitchell. Completing the line-up is saxophonist Rafael Karlen, and his pleasingly oblique melodicism draws much from former tutor Julian Argüelles.

Haven is very much fashioned in the image of ECM’s influential chamber jazz – Azimuth and Corea and Burton’s Crystal Silence are the obvious touchstones – but that’s certainly not to decry it for any lack of authenticity. No Shepherds Live Here, the only piece to feature a lyric, is a topical and powerfully understated reflection on the harm unleashed by predatory men on women (“How could he do it to you?… A wolf in sheep’s clothing strikes again”). Foran in particular catches the ear, and after a clever shift of gears he crafts a deliciously bittersweet solo.

Elsewhere Berardi serves as a fourth instrument, her wordless lines variously assimilated within the ensemble and improvising freely (the punning Foran Policy nicely encapsulates her range). Orbit and Rambling have the strongest rhythmic impetus of any of the pieces, allowing Schumacher to break out his arsenal of minimalist motifs, while Berardi’s shimmering Chihuly acquires an ethereal halo via some subtly deployed electronics.

Perhaps not the best starting point for newcomers to the worlds of Foran and Schumacher, Haven is nevertheless the perfect ear balm for our troubled times.

Brian Morton - 18 June 2019
Like Swallow and Previte, Saft has an essentially playful spirit that indulges in occasional moments of melancholy and sober reflection. The integration of this trio, which has already released...