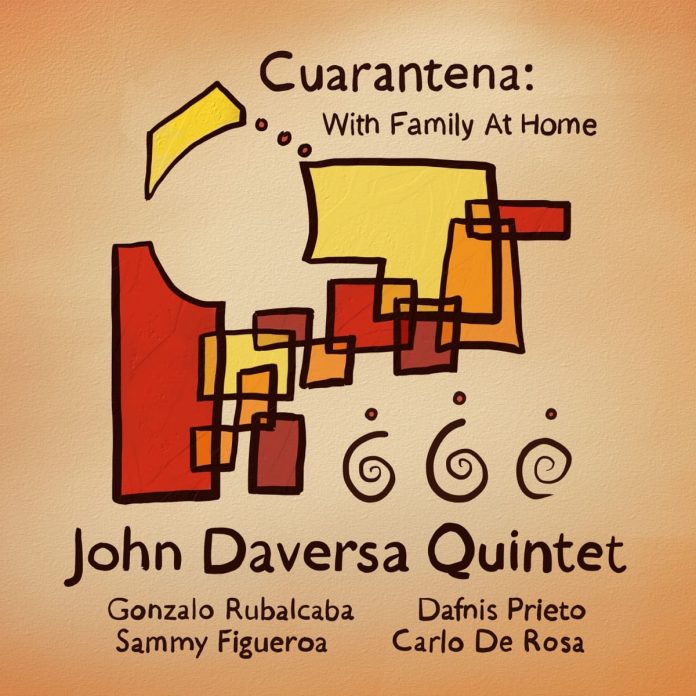 Trumpeter and composer John Daversa is Chair of Studio Music and Jazz at the Frost School of Music, University of Miami. For a number of years he’s led various ensembles including his Progressive Big Band and the John Daversa Small Band. This time he’s assembled a new quintet comprising top-notch Latin jazz musicians to make his eighth album as a band leader.

The idea of Cuarantena: With Family At Home was jointly conceived with Cuban pianist, Gonzalo Rubalcaba. The album reflects upon the importance of family relationships in a time of quarantine due to the pandemic. It’s a compilation of boleros, the slow-tempo song form that played a part in family gatherings when Daversa and Rubalcaba were both children. The boleros are mostly composed by Daversa with four by relatives. Interspersed between tracks, individual band members relate instances of how music and the quarantine has affected their family lives.

The three tracks that are identified by numbers were composed by Daversa’s father, who held the trumpet chair in Stan Kenton’s band. He rarely supplied titles for his songs. #19 and #45 have particularly exquisite melodies. For a taste you can listen here: #45.

La Bailarina (Para Tatiana) with lyrical, muted trumpet from Daversa, was written for his wife, a former ice-skating dancer. El Ultimo Suspiro refers to percussionist Sammy Figueroa’s father who was a celebrated bolero singer. Soldado Distinguido (Para Sgt. Alvin York) was composed to honour the family line of Daversa’s maternal grandmother – a relative of one of the most decorated soldiers in the First World War.

The amusing and lively Puppitas is about Daversa’s two family spaniels and has rhythmic panting by the one that survives today. Fábrica De Conservas De San Francisco is a gentle piano and trumpet duet written for Daversa’s paternal grandparents, who met in the cannery referenced in the song title. The only number that isn’t composed by a family member is Daversa’s lovely arrangement of Un Bolero Para Lola, penned by the Costa Rican singer Debi Nova for her grandmother. The relaxing Opus 1 was written by Daversa’s maternal grandfather who was a professional clarinettist and the album closes with Canción De Cuna Para Hara, a lullaby written by Daversa for his daughter.

The music avoids the excessive sentimentality which can often attend such topics. Instead, it’s thoughtful, mellow and in harmony with the album’s motif. It’s also elegantly executed by a supremely cohesive band of accomplished musicians.