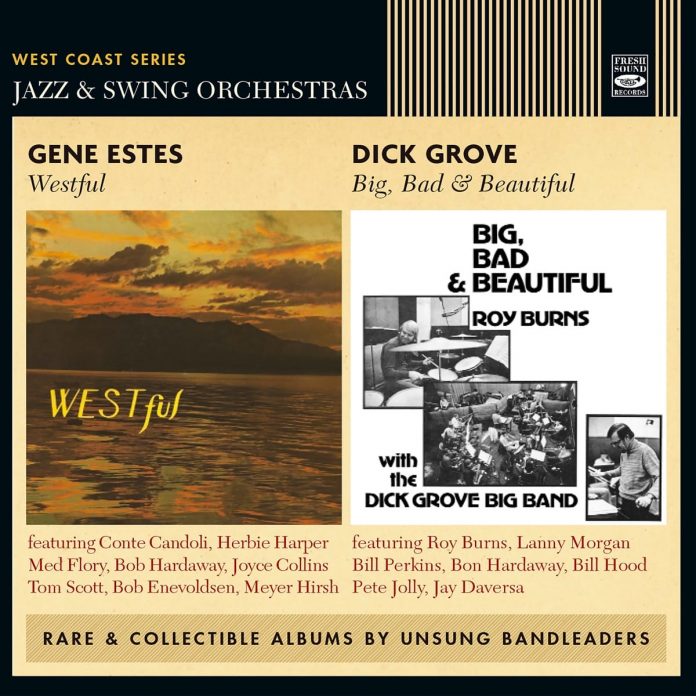 At the time of this recording Gene Estes had established a solid reputation as a drummer of uncommon taste and sensitivity through his work with Harry James, Billy May, Bob Florence and Shorty Rogers. He organised a weekly rehearsal band which included many of the finest Los Angeles studio players who appear here performing his arrangements and many of his compositions.

Bob Hardaway’s expressive tenor shines on Sharly My Boy, Pot Luck and D.A.V. It’s always good to hear Herbie Harper’s warm-sounding trombone and he doesn’t disappoint on Sharley and All About Henry. The 20-year-old Tom Scott impresses on Besame Mucho as does Joyce Collins on her Big “P” showcase. The most heavily featured soloist is Conte Candoli, whose sparkling trumpet is heard through most of the set.

The Dick Grove album was originally issued under drummer Roy Burns’ name whose Big, Bad & Beautiful Drum Set & Method has written transcriptions of his impeccable fills, accents and solos here, making it an essential study for drum students. In 1973 the leader established the Dick Grove School of Music and for his big band recording that year he was able to call on road-band veterans who had established themselves on the studio scene.

Lanny Morgan was not only a superior lead alto player but also a hugely gifted soloist as he shows on The Call and Trilogy For Roy. Bob Hardaway has an inspired soprano outing on Dead Ringer and he is on tenor for Dill Pickles which also has some fine George Bohanon trombone. My Lady has an exquisitely crafted flugelhorn solo by Joe Burnett. This is yet another in Jordi Pujol’s fine reissues of unsung bandleaders.