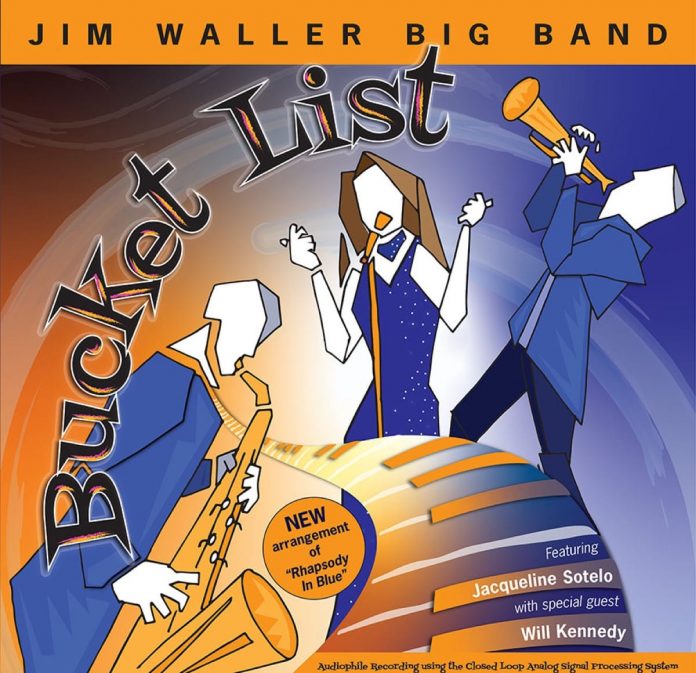 The big-band era is a distant memory but the genre still has much to offer as multi-instrumentalist Jim Waller shows on the many moods of his debut album. The personnel, except for drummer Will Kennedy who is with the Yellowjackets, are new to me but they are clearly tip-top professionals able to interpret Waller’s eclectic charts while contributing memorable solos.

With the opening Samba For Suzell we are in Tito Puente territory. Waller’s tenor dances inventively over the buoyant rhythm and Chris Villanueva contributes a fundamental ingredient to the samba idiom – the montuno.

I Love Being Here With You features Jacqueline Sotelo, whose intimate, soulful delivery conjures up memories of Ernestine Anderson. We also have one of the essential tools in the arranger’s armoury here – the sax soli. Blues For Los Blues is dedicated to the Las Vegas lounge act that Waller worked with in the 60s. There’s another expertly performed sax soli and an outing from Dr. Joey Colarusso whose big, beefy baritone sound is worthy of Nick Brignola.

Rhapsody In Blue has a brilliant reading from the ensemble with tempo changes, rubato passages and more fine Sal Nistico-like tenor from the leader, hinting at Monk’s Well You Needn’t along the way. Funksuite 109 is well named, with suitably down-home contributions from Waller, this time on organ, and guitarist Jason Valdez.

God Bless The Child, another impressive outing for Ms Sotelo, has strong elements of the 1968 Blood Sweat & Tears arrangement which had a trombone solo from Jerry Hyman. Here the band’s Jaime Parker stretches out on trombone to good effect on a vamp leading to an outstanding contribution from Adam Carrillo on alto.

This self-produced CD is the first recording by Jim Waller’s Big Band. Hopefully he won’t leave it too long before the next one.

François van de Linde - 04 November 2021
In the world of jazz, being exceptionally proficient hardly suffices. It is crawling with musicians that play dead-perfect Parker without an ounce of Bird’s feeling and focused and intuitive...