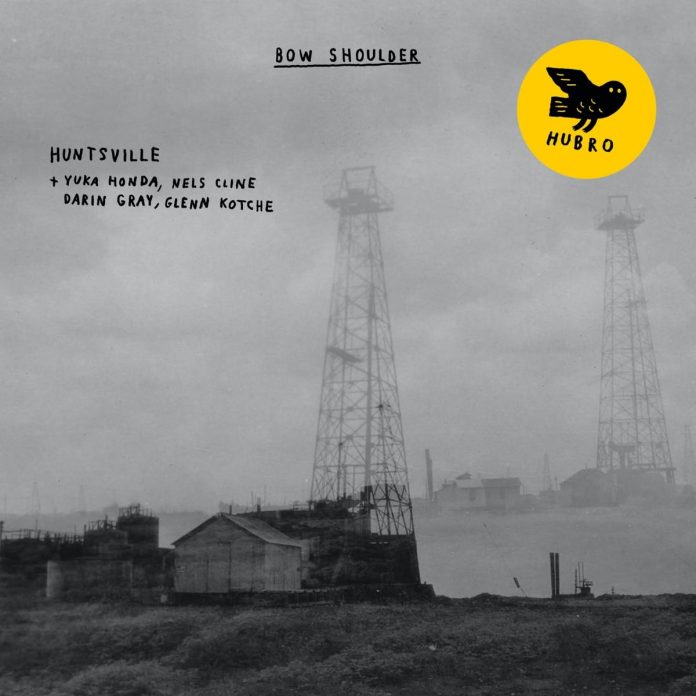 Hunstville was established in 2006 and its epic post-rock soundscapes take in a very catholic range of influences. From the skewed dustbowl Americana of Jim O’Rourke and David Grubbs’ Gastr Del Sol to the darker undercurrents redolent of Sonic Youth’s improv-based SYR series and the post-concrète sound collages of early Krautrock, their heavily improvised music defies easy genre stereotyping.

A cursory glance at the personnel list should be enough to suggest that Bow Shoulder is going to be something special. Each of the four wonderfully atmospheric tracks, recently remixed by Grydeland, were recorded in 2010 at the Chicago rehearsal space of alt-rock legends Wilco. Nels Cline and Glenn Kotche are of course Wilco mainstays, while Darin Gray’s distinguished career includes collaborations with Jim O’Rourke in Brise-Glace and Gastr Del Sol. Last but by no means least is Yuka Honda, whose cutting-edge keyboards and sampling have previously elevated the music of Dave Douglas, Arto Lindsay, Petra Haden and The Beastie Boys, to name but a few.

Whatever the reason for the lag between recording and final mix, Bow Shoulder fully lives up to its promise. Twenty-minute opener Side Wind unfolds with the same patient attention to detail as the peerless AMM. It builds outwards from the steady repetitive tick of a metronome, disembodied guitar chords generating an unsettling atmosphere. When Gray enters after four minutes a harmonic centre is established, and Honda’s wind effects bring renewed momentum. After 15 minutes the pace has quickened considerably and the grinding guitars have reached industrial strength, but just as it all threatens to become crushingly claustrophobic, the sounds suddenly dissipate and the slow decay into silence begins.

Higher and Lower are an obvious conceptual paring, the former a serene drone-based ambient drift-work, the latter taking us deep into the inferno before opening out into a pulsating Faust-like instrumental. At just seven minutes in length The Unshot is probably the most distilled of the four tracks. It takes the listener through several tense abstract sequences with Grydeland’s banjo finally steering it towards a gloriously harmonious resolution.

Intelligent and revitalising improvised music from first to last, Bow Shoulder really is one for the ages.

Bruno Heinen Trio : Out Of Doors