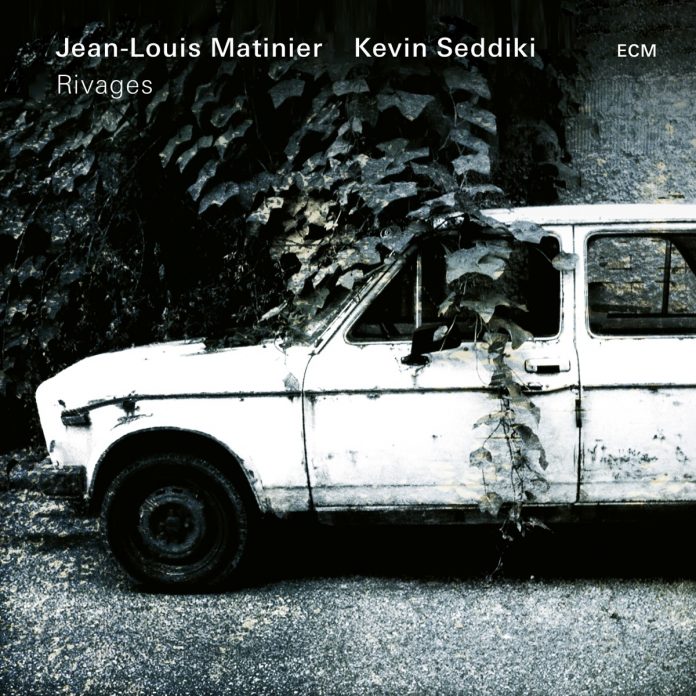 From the earliest days of the label, distinctively conceived duets have featured strongly at ECM – and here is another gem to set next to releases by, e.g., Chick Corea and Gary Burton, Art Lande and Jan Garbarek, Ralph Towner and Paolo Fresu.

While the accordionist Matinier has long had an ECM presence, heard in the groups of Anouar Brahem, Francois Couturier and Louis Sclavis as well as in the 2014 Inventio with Marco Ambrosini on nyckelharpa, this is guitarist Seddiki’s debut for the label. Classically trained, with a beautiful tone and a most cultured yet open sense of dynamics, he has worked with many improvisers in all sorts of projects, from jazz on out. He and the similarly broad-minded Martinier have known each other for practically a decade and their genre-crossing trans-cultural empathy is in both subtle and potent evidence here.

The opening track Schummansko gives notice of the many poetically turned melodic and rhythmic delights to follow, blending Schumann and Bulgarian folk motif to enticing effect. Rubato reverie (epitomised by Philippe Sarde’s haunting Chanson) and purposive, now nudging, now rippling figures (hear Feux Follets and In C) flow in and out of each other in the most organic and space-limned manner, with the chiefly original programme enhanced by freshly voiced readings of pieces by Fauré and Brel as well as the aforementioned Sarde.

In a latter-day lyric piece entitled So Strange To Me, the Swedish poet Gunner Ekelöf (1907-68) wrote of an “absent thoughtfulness” brought on by the early, delicate blossoming of a rose; of “light over a turned-away cheek” – “ As on a spring day/ when you sense something and hold it firmly/ an instant, a second/ unchangeable/ something that shall never turn to summer”.

There is a good deal of such fragile, pensively figured beauty in this exquisitely pitched and totally captivating music.

Previous articleRachel Therrien: Vena
Next articleJeff Hamilton Trio: Catch Me If You Can

This is another in Jordi Pujol’s intriguing series The Best Voices That Time Forgot, devoted to forgotten singers. South Africa born Renée Raff benefits from...

The tall figure of John Scofield and the posh Amsterdam hotel room are like fire and water. Dressed in jeans and a woodchopper shirt...

Press photographer Geoff Ellis's recollections of jazz in the West Country include lamenting the poor turnouts for Earl Hines and Willie “The Lion” Smith...

This is a record by one of the greatest hot trumpeters in jazz; he plays his horn over a pounding rock beat which establishes...