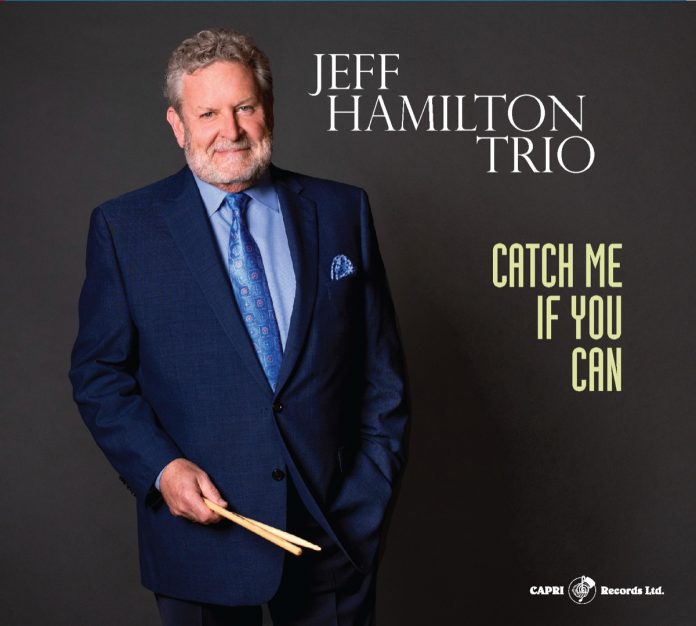 Having played sideman to some of the richest voices and instrumentalists in jazz – Ella Fitzgerald, Diana Krall, Benny Carter, Michael Bublė, Lionel Hampton, Scott Hamilton, Oscar Peterson, Ray Brown, Basie – it’s not surprising that Jeff Hamiliton is revered as one of the most musical of drummers. Whether in a small group, big band or trio setting, his touch and nuanced feel is always sensitive to the song, his groove invariably swinging, singing and slick.

Through this new set, Hamilton displays his artistry to fine effect. As he eases in with the John Williams ballad Make Me Rainbows we hear first the warm flutter of his trademark brushes over a prominent bass figure from Jon Hamar and pianist Tamir Hendelman see-sawing between straight four and waltz time. Continuing to lightly riff, the band cruise breezily through the piece until an abrupt snare and quick switch to sticks signals a slow but dramatic lift to a more driving swing section, snappy with bop-style phrasing.

The George Cables composition Helen’s Song follows and is beautiful. Retaining the laid-back vibe of the solo piano original, the arrangement here is more bossa-felt and spotlights Hamilton’s stunning cymbal work tight to the rhythm of the main melody played in unison between Hamar and Hendelman. Long, unfolding statements from the latter build to some great solos from the latter underpinned by Hamilton’s highly creative comping.

An early highlight is the record’s title track, an upbeat and melodious original from Hendelman. Rhythmically, the melody at first recalls the ploddy style of Monk, until Hamilton’s deft brush fills, dancing between gaps of Hamar’s walking line, flip the pianist into a run of stop-start riffs and, to close, an intensive, fast-paced solo from Hendelman that spills clues as to how the tune’s apt title was decided.

Elsewhere, between the lively, samba-styled Lapinha and Bijou, a Woody Herman big band favourite arranged here for trio, the set also offers up two strong cuts from Hamar in The Barn and Bucket O’ Fat. The former, inspired by the band’s place of practice, is an all-out swinging blueser, while the latter, rising from the growl of a long, low-register bass solo, throws itself towards New Orleans funk and some rousing interplay between the bass and Hamilton’s second-line-inspired beats.

Perhaps the most emotive display of unity here though is on the album’s big ballad, The Pond. Composed by the late John Von Ohlen, a former music instructor of Hamilton, it serves, in a way, not just as as soulful tribute to Hamilton’s much missed mentor, but, lyrically, as a hat-tip to all the aforementioned artists that helped shape the high musical skills that led to this, his finest date to date as a leader.

Round, Round, Round aka Blue Rondo A La Turk packs a real punch, just as it did back in 1959 when it was the...

By 1967, and with a great deal of playing experience to his credit, Clark turned 21 and moved to Oakland. Adding to his already...

Randy L Smith has lived much of his life in Japan and Tacoma and here writes about his jazz experiences in each place, including...

This is a brilliant study of the whole of jazz, told through the medium of analyses of the work of some of its greatest...

Jeff Hamilton Trio: Catch Me If You Can"Through this new set, Hamilton displays his artistry to fine effect ... his finest date to date as a leader"
Advertisement