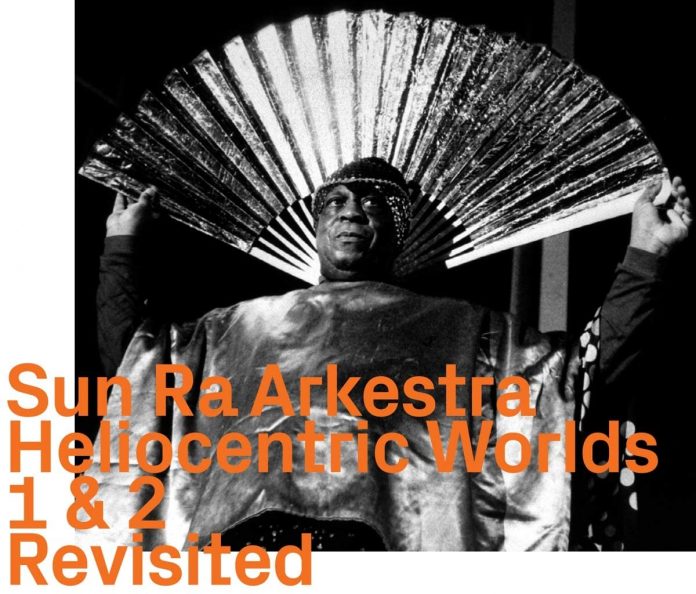 Heliocentric Worlds constitutes a highpoint of Sun Ra’s futuristic free jazz, displaying improvisational freedom within compositional structures. The two volumes – a third was discovered 15 years ago – were originally released by ESP-Disk. Ra moved his Arkestra to New York City in the early 1960s, and recorded this remarkable pair of albums there, in April and November 1965. They are unusual for their use of additional percussion, and what one reviewer aptly calls “the stoic beauty of the performances”.

Volume 1, with an 11-piece Arkestra, has seven relatively brief tracks. They feature long-time members John Gilmore (tenor saxophone) – a band-member till his death in 1995 – and Marshall Allen (alto saxophone), who still leads the Arkestra at the age of 96.

The ESP label wasn’t known for hi-fi. But apart from a clouded start to the opening track, Heliocentric, the remastering is impressive – we can appreciate the beautifully resonant deep percussion on this track, joined by flute and bass trombone. Other Worlds begins with a remarkable unaccompanied piano solo by Ra, followed by a free melee with the pianist at his most high-energy – he’s also on electronic celesta.

Volume 2 pares the ensemble down to eight, and features two extended compositions with a shorter interlude. The Sun Myth begins with Ronnie Boykins’s arco bass, Ra’s tuned bongo and eerie clavioline, and Roger Blanks’ percussion, with interjections from the horns. The clavioline is an electronic keyboard instrument, a precursor of the analogue synth, invented by French engineer Constant Martin in 1947. Again, the percussion is overwhelming in its impact – a quite unique achievement in free jazz.

Cosmic Chaos is high-energy and close to other developments in free jazz at the time. These two pieces are separated by the briefer, at times lyrical A House Of Beauty, for piccolo, clavioline/piano and bass, joined later by drums and baritone sax. This reissue is a testament to one of the most remarkable ensembles of 60s free jazz.

Nigel Jarrett - 06 July 2020
Lots of jazz today is the sound of familiarity, not the sound of surprise. It says much for the music that though the two are more or less mutually...