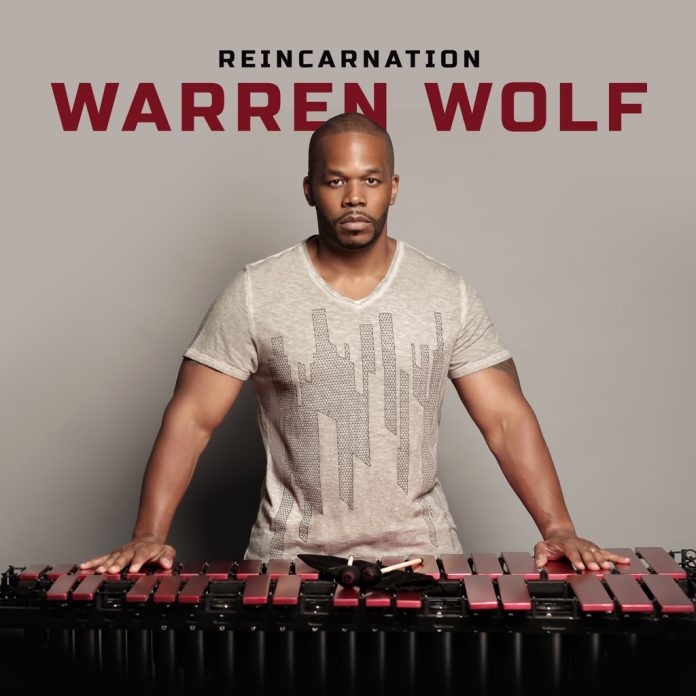 Vibraphonist Warren Wolf’s Reincarnation is his fourth leader album on the Mack Avenue label. His first, self-titled album was released in 2011 and the MA sessions have so far featured notable jazz musicians such as Jeff ”Tain” Watts and John Scofield.

Wolf studied and now teaches at the Berklee College of Music and his musical expertise is prevalent throughout this recording. In 2009, Wolf played on Christian McBride’s debut album, Kind Of Brown, which received an NAACP nomination for Outstanding Jazz Album, and he has collaborated with other musicians and educators such as Bobby Watson and Donal Fox.

The album opens with a light vibraphone motif, and a spoken-word passage that introduces Wolf as the leader of the band. Indeed, Wolf leads the album throughout, taking melodies both simple and complex, as well as extended solos such as on the third track Vahybing.

The fourth track, In The Heat Of The Night, begins with another spoken-word section from Marcellus “Bassman” Shepard, this time with somewhat humorous innuendo, that continues through a slow, grooving rhythm over which vocalist Imani-Grace Cooper provides delicate, impassioned vocals. This sexually charged, tongue-in-cheek track adds an interesting dynamic to the album.

The session then returns to the contemporary jazz style of The Struggle, which features length improvisation by Wolf and pianist Brett Williams. Williams is the only musician besides Wolf that features on every track, playing crisp jazz piano, as well as lending a soft funk and soul style on the Fender Rhodes. In addition, there are tracks in a more typical pop-song format, such as Sebastian And Zoë and Livin’ The Good Life.

Shepard’s vocals take a little bit of getting used to, but make the album a more original and unique experience, with each track clearly well thought out and meaningful, as humour and serious composition interchange between each song. Wolf’s playing is tasteful and refined, and the resulting album is an excellent mixture of styles, with jazz at its core.

Life is good when you get the feeling that you’re listening to The Dude from Quincy Jones, even if it’s ersatz Quincy. Twenty-three-year old Simon...

I’ll never forget the early occasions when I saw McCoy Tyner in concert. The first time was at Ronnie Scott’s in London, where I...

It's significant that John McLaughlin has spent so much time with Miles Davis since this album was recorded, since it reflects the trumpeter's influence...

"Shepard’s vocals take a little bit of getting used to, but make the album a more original and unique experience as humour and serious composition interchange between each song"Elliot Marlow-StevensWarren Wolf: Reincarnation
Advertisement