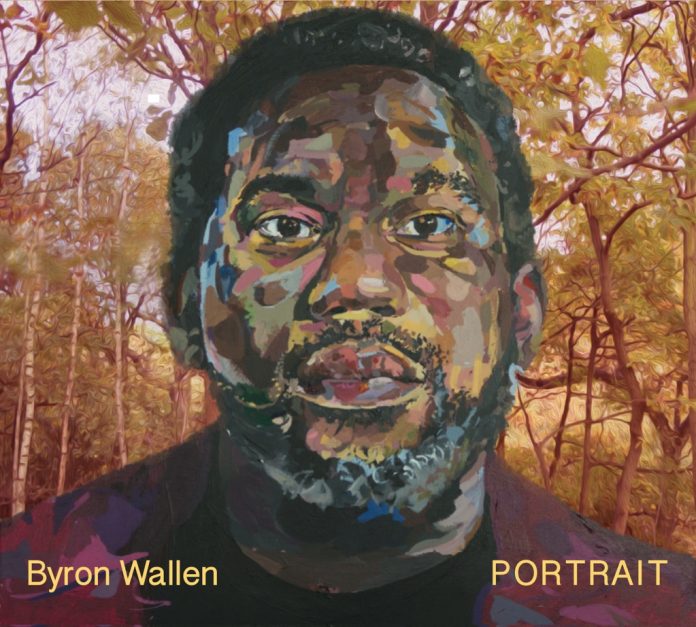 Inspired by the pan-cultural identity of Woolwich, in South East London, Byron Wallen’s Portrait is appropriately subtitled Reflections On Belonging. (Although the subtitle is missing from the album’s cover, it is clearly denoted within the title of the sleeve notes). The reflective element is certainly present from the start; Anthem (Epilogue), evinces a mixture of street sounds, effects and voices married with a ghostly but curiously hypnotic melody.

Things start to take off properly with the haunting lyricism of Each For All And All For Each, imbued with a subtly African rhythm and notably assisted by Rob Luft’s chiming guitar work. Wallen’s stridently confident horn takes centre stage here and again shines brightly on No Stars No Moon, a fluid composition evoking an Eastern flavour underpinned by crystalline guitar, deeply resonant bass and percussion courtesy of guest Richard Baker.

The atmospheric nature of the album is emphasised by the opening of Alert which channels Charles Mingus’s treatment of George Gershwin’s A Foggy Day. This suite follows on from that famous 1956 recording, utilising soundscapes, in addition to the music, to better reflect Wallen’s affectionate paean to Woolwich, its community and its environs.

The release of Portrait signals a welcome return for the trumpeter’s recorded oeuvre since Wallen’s last album under his own name was the North African inspired Meeting Ground (Twilight Jaguar, 2007). Stylistically, that previous album was more focused on one geographical/spiritual area whereas this latest one draws on a wider range of regional and urban influences. These heterogeneous elements remind the listener of Wallen’s deep commitment to learning from music both within and outside of Western orthodoxies.

From age 12 he studied classical piano taking up the trumpet at 16 and travelling to New York to study with the likes of Terence Blanchard, Jon Faddis and Donald Byrd. But he also studied gamelan music in Java and traditional African music in Uganda. Using the parochial London area as a base for inspiration serves to juxtapose Wallen’s previous exposure to non-Western music with a contemporary and cosmopolitan jazz sensibility.

The extraordinary chanting of schoolchildren on Spirit Of The Ancestors with Wallen’s trumpet, variously open and muted, playing over an anthemic bass line is both affecting and memorably effective. Wallen’s Four Corners quartet, albeit with a different line-up from previous outings, is again augmented by percussionist Baker on the joyful Holler and Wallen himself is on ebullient form.

From the very off this album intrigues and captivates the listener and imparts new messages and meaning on every replay. Even the record’s captivating cover portrait of Wallen, painted by Woolwich-based artist Marc Drostle, is another reminder of the complexity and originality of the music presented here.

Whilst it’s invidious to single out any one participant of this extremely fine quartet, Luft’s virtuosity shines through as a lead instrumentalist, equal to Wallen’s. His playing is spectacularly virtuosic and on Fundamental, for example, it could be Bill Frisell wielding the axe, so deftly are the lines executed.

This is a very good album indeed and it’s positively great to have Wallen recording under his own aegis once more.

Thomas Fletcher - 01 March 2022
Not many guitarists on the scene today can boast a career quite like Robben Ford's. The blues-jazz virtuoso has toured and recorded as a sideman for such superstars as...