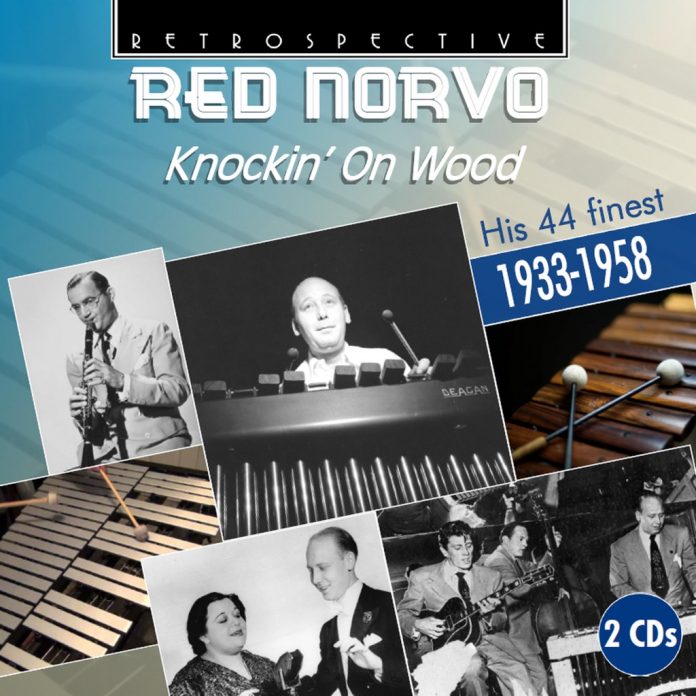 Retrospective’s Ray Crick ends his cornucopian survey of Red Norvo’s recordings well before the man himself set aside his vibraphone mallets for good. Norvo was mixing it with the moderns during the 1950s and beyond just as successfully as Coleman Hawkins did.

Norvo toured Europe in 1968 and was one of George Wein’s Newport All-Stars the following year. Despite encroaching deafness, he led a trio in the early 1970s. He was still playing when he suffered a stroke in 1986. Thirteen years later in California he died, aged 91. Crick’s compilation begins when Norvo was in his 20s and recording under his own name with a quintet that included Jimmy Dorsey, and it ends 25 years later with a version by his own orchestra of Harry Warren’s Garden Of The Moon. He was mostly a bandleader and therefore in control.

By 1958, he’d long been playing vibes – or the “vibraharp” as he insisted on calling it (when everyone else had begun to know it as the vibraphone). His description chimed with critic Otis Ferguson’s view that the instrument in Norvo’s hands was a model of balance, restraint, and delicacy. It was a fair distance from his days of “knocking wood”, as playing the xylophone and the softer-sounding marimba was called. No-one plays the xylophone in jazz today – a statement guaranteed to elicit a call to the editor from some obscure location.

It’s not Norvo’s fault that the unyielding xylophone now appears as something of a comic novelty in jazz, a symphony orchestra instrument slumming it. But he played it as he was to play the vibraphone, with bounce and panache. In Crick’s selection, it features in small-group and orchestral settings up to the end of the 1930s, the switch-on record coming with his Overseas Spotlight Band from 1939 to 1943. He was also a vibes sideman for others, including Teddy Wilson, Edmond Hall and Benny Goodman. As late as 1957, he appeared as xylophonist with his sextet, which included Ben Webster and Harry Edison.

Many of the tracks here show Norvo in almost all chamber permutations – quintet, sextet, trio, septet, “selected” sextet, “swing sextette”, octet, and quartet. This was the swing era. In a brash swing band, a vibes player and others like it had to be in charge if the instrument was to be properly heard. In Woody Herman’s 1946 Woodchoppers, Norvo had to hold his own beside Shorty Rogers, Bill Harris, Flip Phillips, and Herman himself. Thanks to sensitive arrangements, he does well, sharing the head in unison with guitarist Billy Bauer on Igor and taking a solo, then featuring heavily on I Surrender, Dear with some unescorted skedaddling atop the beat.

The trademark trios (six tracks in all) are here: Norvo, Tal Farlow and Charles Mingus and Norvo, Jimmy Raney and Red Mitchell but not Norvo, Farlow and Mitchell of 1952 and 1955, arguably the best of them. That said, Crick’s conspectus is wide and he has made some excellent choices.

The jazz vibraphone is quickly associated with Lionel Hampton, Milt Jackson, Gary Burton and their contemporaries. Norvo should be among the peers. Despite his willingness to take in changes of taste and style, his playing was lodged essentially in the era covered by the 1930s and its extension beyond that decade. But, as Gunther Schuller said, quoted in Digby Fairweather’s comprehensive liner notes, “(Norvo) was among the very best artists that jazz has had to offer”.