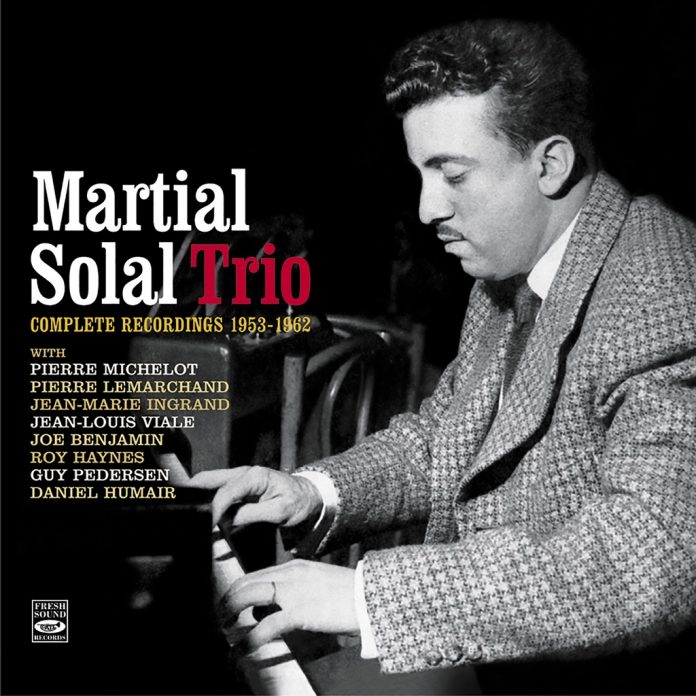 Arguably the greatest French jazz pianist (also a composer and big band leader), Martial Solal began his recording career in 1953, playing on Django Reinhardt’s last studio session. Born to French parents in Algiers on 23 August, 1927, he was encouraged by his mother, an opera singer, to play clarinet, saxophone and piano. In 1942 he was expelled from school with the Vichy regime’s endorsement of Nazi racial policies because of his father’s Jewish ancestry.

Martial began playing piano in public in 1945 and moved to Paris in 1950, forming his first quartet with trumpeter Roger Guerin, bassist Paul Rovere and drummer Daniel Humair. Versed in classical music – especially by composers Bartok, Stravinsky and Messiaen – his early jazz influences were Fats Waller, Teddy Wilson, Art Tatum, Erroll Garner, Bud Powell and Bill Evans. Starting in the 1960s, Solal recorded or played with Don Byas, Lucky Thompson, Stan Getz and Kenny Clarke. In 1963 he appeared at the Hickory House in New York and was recorded at the Newport Jazz Festival (with bassist Teddy Kotick and drummer Paul Motian). Starting in the 1980s he recorded with a big band, and released such notable albums as Sans Tambour Ni Trompette (1970), the solo albums Balade Du 10 Mars (1998), En Solo (1971), Bluesine (1983, Live At The Village Vanguard (2001), Rue De Seine (2005), Exposition Sans Tableau (2007) – with vocals by his daughter Claudia Solal – and Live At The Village Vanguard (2009).

That listing by no means exhausts Solal’s musical (and filmic) activities, which still continue. They do, however, contrast with the absence from most reference works of his recording activities with various trios from 1953-1962. This Fresh Sound compilation is therefore a welcome (and overdue) addition to his discography.

A collection of studio and “live” recordings, all set in Paris, it sheds new light on Solal’s development as a composer, small-group leader and virtuoso soloist. As Richard Cook noted, there are few jazz pianists “whose dedication to the piano/bass/drums trinity have yielded such riches over such an extended period”. From the beginning, Solal’s objective was to play bop (he was an admirer of Bird and Diz), but he gradually formed his own style of playing, searching for new harmonies because, as he has said “to me evolution is the first and most important thing”.

A fleet-fingered and highly intelligent player, Solal was described by Downbeat critic John A. Tynan as combining “the blinding technique of Tatum with the boppish conception of [Bud] Powell. The combination is most salutary”. The 33 tracks on this set confirm the acuity of Tynan’s assessment.

The earliest ones (despite sounding as if they were recorded under water) reveal a Garner-influenced Solal putting all his energies into miniature (none over three minutes) recreations of such standards as Once In A While, Dinah, Darn That Dream, and Ramona. Michelot and Lemarchand provide more than adequate support. With the backing of Jean-Marie Ingrand and Jean-Louis Viale, Solal fashions dazzling renditions of Poinciana and Pennies From Heaven. With visiting Americans Joe Benjamin and Roy Haynes, he puts an increasingly distinctive stamp on such favourites as You Stepped Out Of A Dream and The Way You Look Tonight. The other titles on CD1 also deserve attention.

On CD2, the performances recorded between 1960 and 1962, with Pedersen on bass and Humair on drums, are even more rewarding. A witty and extended (seven-minute) live version of Jordu has Solal in full flight, plus six of his own compositions, including a time-shifting and intriguingly titled Nos Smoking. The final (and at over nine minutes the longest) cut is another Solal original, Suite Pour Un Frise Part I & II. Written to commemorate the unveiling in Brussels of a frieze by artist Raf Cleeremans, it hints at even more complex and haunting compositions that were still to emerge from the fertile musical imagination of Martial Solal. An informative essay by Jordi Pujol and attractive photographs enhance this rewarding set. Recommended.

Jeremy Isaac - 03 March 2022
The Deportees are a Liverpool-based sextet formed in late 2016. As the title suggests, the album was recorded at the city’s What Studio, and was originally released in early...

Jazz Journal - 26 June 2022
This is one of a series of taped interviews with musicians who are asked to give a snap opinion on a set of records played to them. Although no...