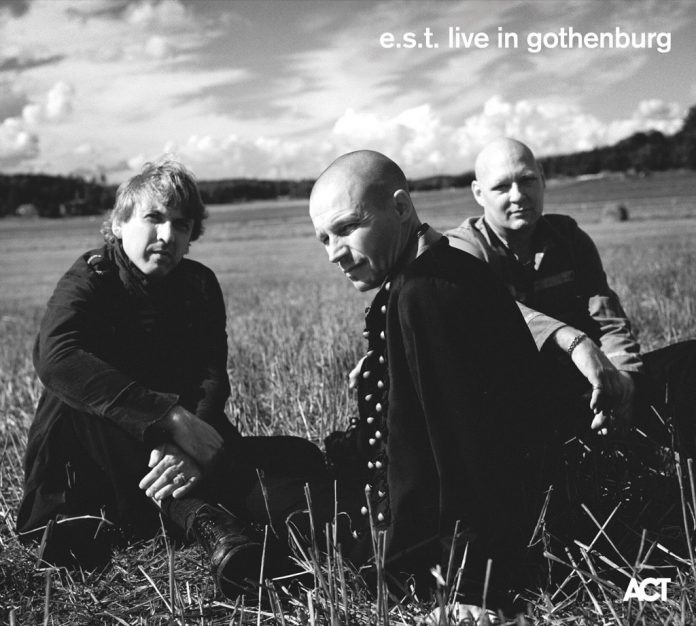 This previously unreleased live recording sits between the trio’s breakthrough albums Gagarin’s Point Of View (1999), Good Morning Susie Soho (2000) and Strange Place For Snow (2002) and their first world tour in 2002. Svensson declared this concert to be one of the best the trio ever played. This is not the only live recording made by e.s.t. before Svensson’s death in June 2008 but it is the only live recording showing e.s.t.’s more intimate and acoustic side, rather than the bigger concert-hall sound to be found on Live In Hamburg (2006) and Live In London (2005).

There is certainly an intimacy, originality and freshness about the recording which begs the question why did ACT not release the album earlier? Nonetheless, this is in my view, an important album for Svensson fans. Whilst it doesn’t tell us where e.s.t. would have gone, musically, if Svensson had not died prematurely, it does give an insight into the transition of e.s.t. from a relatively small Swedish jazz trio in the late 1990s to international jazz superstardom.

It’s no surprise that the set predominantly includes tracks from Gagarin’s Point Of View and Good Morning Susie Soho, but The Rube Thing originates from the 1995 Mr And Mrs Handkerchief album and Second Page from Winter In Venice (1997). Bowling appears to be a new track at the time of this recording and doesn’t get another album appearance until the Live In Stockholm DVD (2003).

This trio have always had a playfulness about them combined with a touch of humour. Any band that can write music titled When God Created The Coffeebreak, Why She Couldn’t Come and Mingle In The Mincing Machine are examples in point. That playfulness is abundantly evident in this album as the band play extended improvisations as well as unaccompanied solo passages.

Svensson on piano is clearly the leader and is in exemplary form; but Dan Berglund on bass and Magnus Ostrom on drums are not passengers. This is a trio confident in what they play and confident with each other. This was a turning point for the band as their music was getting more and more international recognition and their first world tour was being planned. They didn’t know it at the time, but international success was around the corner. The trio would go onto record another half dozen studio albums and a handful of live recordings all to critical acclaim.

Svensson’s premature death, on 14 June 2008 aged 44, was a sad loss to the jazz world. Sadly we are now left with just archive material but I do hope that ACT have more recordings of this quality in reserve.

John White - 18 February 2021
Ageing Frankophiles will already own (and repeatedly play) some of the 16 albums represented in this excellent anthology. They are All The Way, This Is Sinatra!, This Is Sinatra...

Mats Eilertsen Trio: And Then Comes The Night