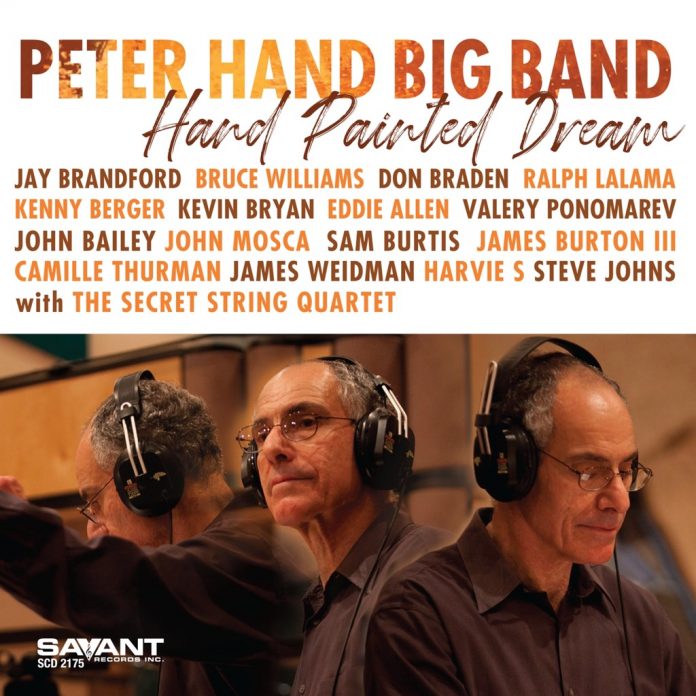 Following on from their 2014 release Out Of Hand showcasing saxophonist Houston Person, the Peter Hand Big Band are back with yet another mesmerising compilation of originals and well-known covers. The emerging ensemble is once again audacious and appealing, swinging and sophisticated while constantly performing the artistic arrangements that Hand presents with exceptional ability.

Vocalist and saxophonist Camille Thurman features on two tracks and has been widely noted for her vocal brilliance by many luminaries including George Coleman, who described her as “a wonderful and talented saxophonist and vocalist”. Her voice is warmly welcomed on If You Could See Me Now, as is her saxophone solo on Calypsiana, inspired by Hand’s time living on St. Thomas in the Virgin Islands.

Among other personal favourites is the inclusion of a string quartet led by Jennifer Choi to introduce Hand Painted Dream which demonstrates the effortless switching between 6/4 and 4/4 achieved by Braden. Brazilian Emerald is one of two bossa pieces, the other being Island Of The Heart. Brazilian Emerald was originally recorded by Houston Person on his 2007 album, Thinking Of You. Both Brandford on alto and Harvie S on bass have their say on this tune too, providing exquisite displays of excellence.

One of Hand’s originals is Once Upon A Time, a slow and wistful piece which includes Hand quoting Round Midnight (I believe) on solo guitar. The composition develops into an expressive statement revealing various sections of the band including the brass and saxes as well as giving Bailey the opportunity to deliver a trumpet sermon.

If there was ever a “complete arranger”, Hand would certainly fit the bill. His thoughtful arrangements seem to utilise the capability of each individual on the recording. I admire the range of styles which Hand has decided to incorporate too; the record has the lot – ballads, straightahead, calypso, bossa and more. Who says the big band is dying given the talent and virtuosity of the Peter Hand Big Band in this fine addition to the ever-present repertoire?

Pepper And The Jellies: The Stuff Is Here