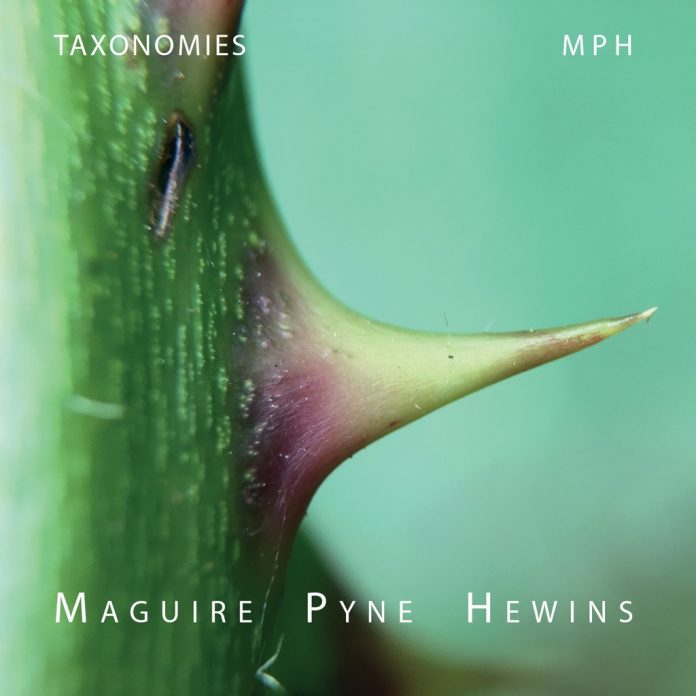 MPH came together in 2018 at the suggestion of Alex Maguire, who had previously worked separately with both Martin Pyne and Mark Hewins. Given their varied backgrounds in jazz, free improvisation, rock and classical musics, dance and theatre, it is no surprise that the three have performed a music here that is gloriously eclectic and wide-ranging in its references, by turns playful, ethereal, abrasive, earthy, delicate and lyrical.

What is surprising, however, is that the entire set is totally improvised. I say surprising, not because the musicians are not themselves fine improvisers, but that the music sounds almost through composed in places, or at least structurally organised. There is a solid logic to each piece, the wooden percussion of Pyne on the opening Tormentil, for example, shuffling out a rhythm over which Maguire plays a delightfully engaging melody set off by Hewins’s Latin guitar, together sounding as if this was a piece into which they had put considerable thought beforehand. Likewise, the intertwining of vibes, piano and guitar on Finger Muscle suggests prior organisation. But not so, if they are to be believed.

Interestingly, the first day’s music, with Maguire on organ sounding more like Sun Ra than anyone else, is looser and more evidently improvised, but again still has a form about it that suggests pre-thought. That tension between free improvisation in the studios and harmonic and rhythmic coherence on the finished CD is what gives this set its power, and its great appeal.

By the way, all the track titles are, in their words, “inspired by the wonderfully evocative traditional names for various flora and fauna, suggestive of timeless narratives, characters, landscapes and mindscapes.” Evocative, that’s the best word to describe this set.