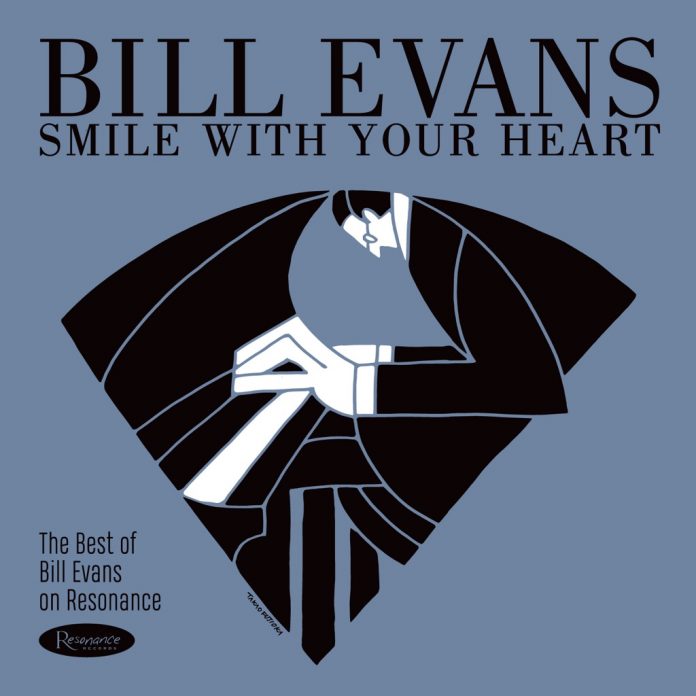 This well-chosen sampler of four “live” recordings by two versions of the Bill Evans Trio, was produced by Zev Feldman and his associates at Resonance Records. Handsomely packaged, with five miniature jazz-themed illustrations by graphic Japanese artist Takao Fujioka (also editor of the Japanese jazz journal Way Out West), it includes an emotional post-script from Bill’s son Evan welcoming the release, and asserting that the music is “as tender and divine as it is brilliant and swinging”. Unusually, no details of the dates or personnel on the selections are given. Not surprisingly, the sound varies slightly from venue to venue, but is more than acceptable.

An uptempo Someday My Prince Will Come, the opening track, (first recorded by Evans on his 1959 album Portrait In Jazz) and taken from the double CD set Live At Art D’Lugoff’s Top Of The Gate (1968), has Bill at his happiest, with the unswerving support of Eddie Gomez (bass) and Marty Morell (drums). A contemplative Yesterdays (included on the 1967 album Further Conversations With Myself), features an overlong solo by Gomez. Mother Of Earl (despite some audience chatter) maintains a gentle swing with brief but pertinent interjections from Gomez.

Some Other Time (recorded by MPS in the Black Forest, 1968), has a superbly executed and jaunty version of You’re Gonna Hear From Me, a waltzing Baubles, Bangles and Beads, and a reflective Funny Valentine, with sensitive brush work from Morell. On the companion album Another Time, recorded for a Dutch radio programme in the same year, Jack DeJohnette replaces Morell in a programme of Evans’ favourites. A breathtaking interpretation of Nardis is enhanced (or diminished, depending on the taste of the listener) by an extended (four-minute) solo by DeJohnette. More pleasingly to these ears, Very Early and an adroitly performed Turn Out the Stars have the tightly knit trio in near-perfect accord – although Gomez was reportedly not happy with his bass tone during a “generous” solo on Early.

The remaining three selections, from the double-CD set Bill Evans In England, recorded at Ronnie Scott’s in 1969, are taken from bootleg tapes partly “restored” by Resonance and issued with the approval of the Evans estate. A suitably airy Polka Dots And Moonbeams is followed by a subtle reworking of Re Person I Knew (the title of a 1974 Evans LP), with empathetic support from Morell and Gomez. The final track, Waltz For Debby, perhaps his most performed composition, has Evans skipping through the melody, with propulsive embellishments from his bassist and drummer.

An eclectic compilation that will delight Evans’ countless admirers and serve as an exemplary introduction to the uninitiated, Smile With Your Heart is another welcome addition to the innovative Resonance catalogue.

Discography
(1) [Live At Art D’lugoff’s Top Of The Gate] Someday My Prince Will Come; Yesterdays; Mother Of Earl; (2) [Some Other Time: The Lost Session From The Black Forest] You’re Gonna Hear From Me; Baubles, Bangles And Beads; My Funny Valentine; (3) [Another Time: The Hilversum Concert] Nardis; Very Early; Turn Out The Stars; (4) [Evans In England] Polka Dots And Moonbeams; Re: Person I Knew; Waltz For Debby (55.26)
Evans (p); Eddie Gomez (b); Marty Morrell or Jack DeJohnette (d). Various dates and locations.
Resonance Records HCD-2038

Steve Voce - 10 March 2019
Sarah made her first recording when she joined Billy Eckstine’s band in September 1944. It was of Tadd Dameron’s chart of "I’ll Wait and Pray" for the obscure De...