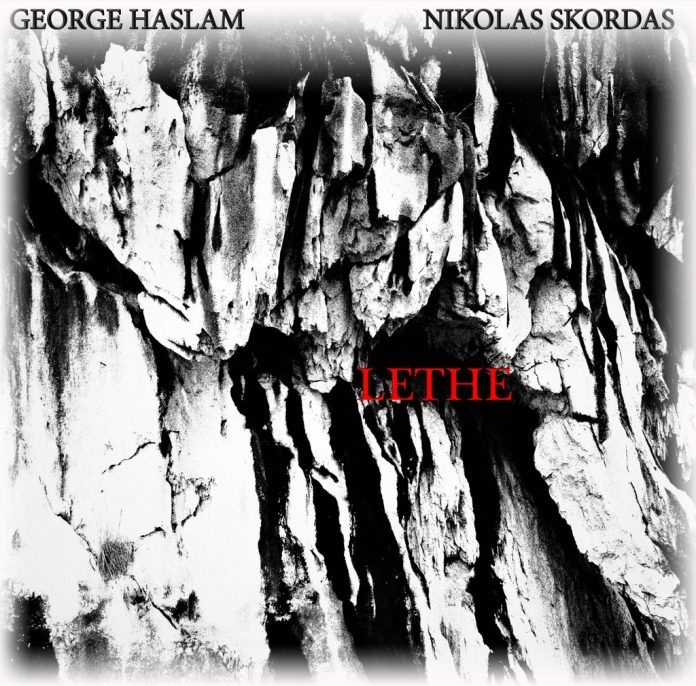 Many JJ readers will know of George Haslam from his Slam label and his past associations with leading British improvisers such as Paul Rutherford, Evan Parker, Lol Coxhill and Paul Hession, and collaborations with Mal Waldron, Arturo Sandoval and Charlie Mariano. He has also played extensively throughout South America and Europe and here he is partnered by leading Greek saxophonist Nikolas Skordas.

The music may well be outside of the experience of many readers with its leaning towards folk elements and experimentation, but much of it is firmly fixed in the jazz tradition which extends the explorations of sound, patterns and textures. There are tracks which are overtly more folk-orientated, using instrumentation not usually associated with jazz – the zither and tárogató, a small reeded Eastern European instrument, used in the past by Charles Lloyd and Peter Brötzmann. These serve to evoke a spiritual, often contemplative and meditative feel that is at times complemented by bells and the voice of Sophia Koroxenou, giving a denser backcloth on which the improvisation lies.

There are passages of real beauty and intensity and a less worldly reviewer might have seen greater significance in the sudden glimpse of the green-domed mosque as the train on which I journeyed whilst listening passed through Willesden en route to Marylebone.

The passages that stood out tended to be those with Skordas’s soprano and Haslam’s alto played in tandem, creating patterns around each other, on The Windows, Conversations With Birds (Haslam on tárogató) and Spiritual Fall – moments of mellow resonance and purity of sound, with blues-tinged inflections – Haslam is never far away from his mainstream roots. The fragmentation of Life In Wrong Way is resolved as their own musical conversation develops, as is the initial dissonance on No Plans.

I found the introduction of a bagpipe on the title track less attractive, and although it soars effectively above the density of voice and zither, the wider range of the more melodic soprano saxophone gives a more potent use of space.

Jazz Journal - 24 May 2021
These tracks were recorded just a year ago at that haven of jazz in San Francis­co, the Blackhawk. They feature the cur­rent Monk quartet plus trumpeter Joe Gordon and...