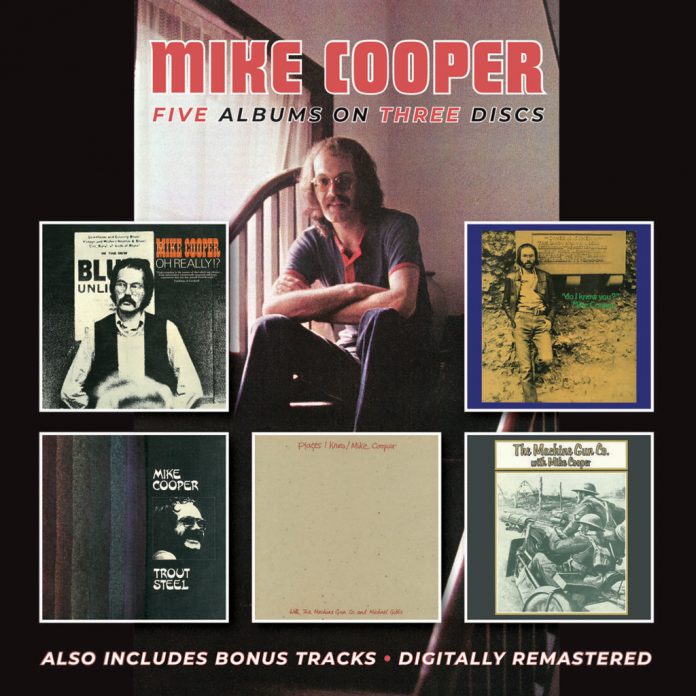 Mike Cooper’s recording history goes back to the late 1960s, when Oh, Really?! was released and continues to the present – his most recent album is 2018’s Tropical Gothic. This five-album package (remastered, on three CDs, with bonus tracks) is a bit of a bargain for fans of his early material, and worth a punt for the curious who have so far missed out on this body of work.

Cooper is a singer, songwriter and guitarist: dipping into these recordings, it’s clear that exactly what sort of singer, writer and guitarist varies greatly across the four years between the first and last sessions. There’s the acoustic blues Cooper of the first album, playing a National Steel with great verve and singing like his rural blues heroes. There’s folk Cooper (my favourite, mostly on Do I Know You? and the folk-blues of Goodtimes).

Of particular interest to Jazz Journal readers, there’s the jazz Cooper, joined by some of the UK’s leading jazzers including Alan Skidmore and John Taylor on parts of Places I Know and Trout Steel, which features vocals from the mysterious Heron – possibly Mike Heron, which would help to explain the Incredible String Band-ish Sitting Here Watching. At the album sessions, the sleeve notes claim, Mike Westbrook and Norma Winstone “sat and watched”. Winstone adds vocals to parts of Places I Know, including Country Water, a delightful song that sounds like a pub rock number from the likes of Brinsley Schwartz.

The jazz-influenced numbers haven’t aged too well, although Mike Gibbs’s arrangement of Goodbye Blues, Goodbye makes imaginative use of horns. I’ve Got Mine rolls on pleasantly during the guitar/vocal sections but the saxophone and violin interjections seem somewhat superfluous. Pharaoh’s March – an improvised piece dedicated to Pharaoh Sanders – opens with saxophone interplay but only grabs the attention when the guitars take over and loses it again when the saxes return.

When Cooper plays the blues, especially instrumentals, or sings his folk-influenced numbers like Think She Knows Me Now or the gently pretty Too Late Now, he’s at his most enjoyable. Such numbers form the majority of this collection, so four stars it is.

John Adcock - 13 August 2019
In addition to these two mighty albums from Coltrane, this set also presents his 1961 album Olé in its entirety, some tunes from The Best of Birdland Volume 1...