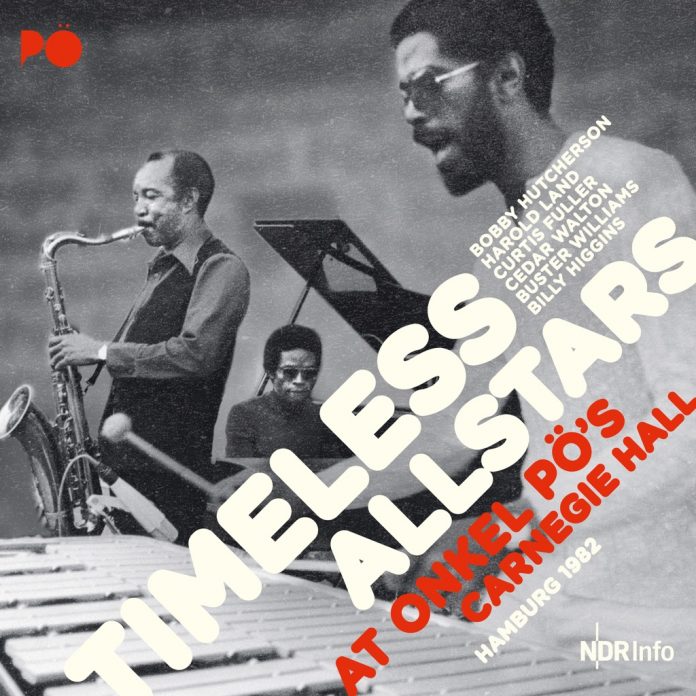 Bobby Hutcherson, Harold Land, Curtis Fuller, Cedar Walton, Buster Williams and Billy Higgins formed the Timeless All Stars in 1982 – named after the Dutch label on which they recorded. The band released three albums between 1982 and 1986; on Time for the Timeless All Stars from 1991, Curtis Fuller was replaced by Steve Turre. This live album, which features the original line-up recorded live at the Hamburg club and taped for broadcast by radio station NDR, makes that five.

It’s a remarkable rhythm team, with Billy Higgins the heart of the group. This is one of the great jazz drummers, and any group that features him will be of interest. There is a tendency towards a blowing session ethos, with four long tracks, but there imaginative theme expositions and the playing is of a very high standard.

Probably the least compelling track is the opening blues, Tokudo. The remaining compositions are classics, however. The ballad My Foolish Heart is a showcase for Bobby Hutcherson, with a middle section in double-time. Cedar Walton’s excellent Clockwise is at mid-tempo, and the feel picks up again with Land’s hard bop classic Mapenzi, title-track of an album he co-led with Blue Mitchell in 1977. Harold Land is one of many saxophonists who began in cool jazz or hard bop and then fell under the spell of John Coltrane – obviously he is well into his Trane period here. Curtis Fuller is the least interesting soloist, but he makes a pleasing contribution to the ensemble sound. This is a very enjoyable addition to the discography of a rewarding band.