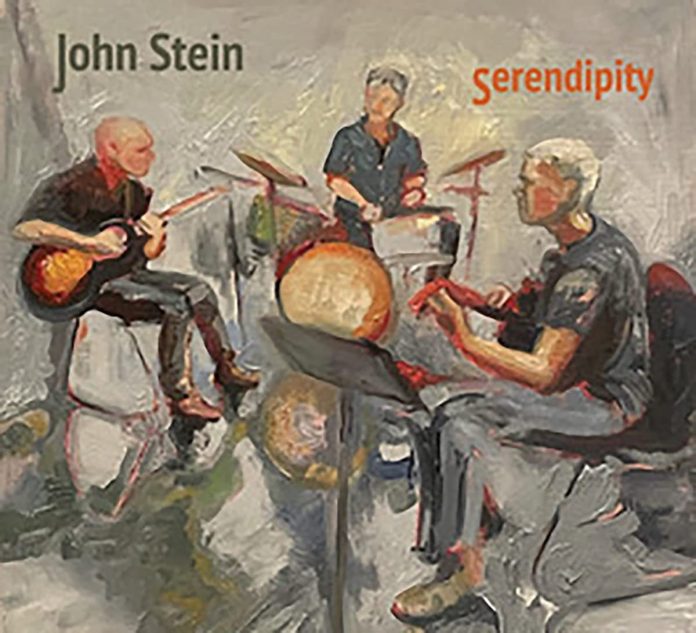 Prior to the initial outbreak of Covid, Boston-based guitarist John Stein had been booked for a live performance in New Bedford, Massachusetts; the pandemic stymied that. Like so many musicians, he had to put things on hold and found himself playing informal, casual sessions with friends to keep surviving musically.

Undeterred, he decided to arrange things with bassist Ed Lucie and drummer Mike Connors, imagining themselves to be on stage and presenting a programme as if they were in front of a live audience: “There were no second takes, no overdubs, no corrections; we simply played each tune and then moved on.” The result – hence the name – is an unplanned fortunate discovery and an enjoyable mix of a few original Stein compositions and some re-imagined versions of familiar numbers.

Stein’s style is relaxed; clear chords, background fills and largely simple, straightforward lines. The tracks are pinned down by Lucie’s bass, unobtrusively but firmly leading, whilst Connors ensures that each has a strong underlying rhythmic current. These elements are evident from the beginning – a straight rendition of Rollins’ Alfie’s Theme, closely followed by another associated with that period of the saxophonist, On Green Dolphin Street.

Stein’s composition Elvin!, in 5/4, is a reworking of Paul Desmond’s masterpiece Take Five, a fine performance that loses nothing of the inherent swing of the original source. The Night Has A Thousand Eyes gives the trio an opportunity to stretch further out, in particular a busy, affirmative contribution from Connors, whilst East Of The Sun has some close interplay between guitar and bass, the supporting brushwork keeping it moving. The album is a good example of how a guitar trio approaches standards and its slightly different nuance.

Despite the absence of audience, this is a rewarding glimpse of how these musicians operate in a “virtual” live setting. Once any restrictions are lifted, residents of New England should look out for their performances.

John Watson - 15 October 2020
This is the debut CD by South Florida big band The Horizons Jazz Orchestra, and what a splendid start they have made. The Brite Side is a tribute to...