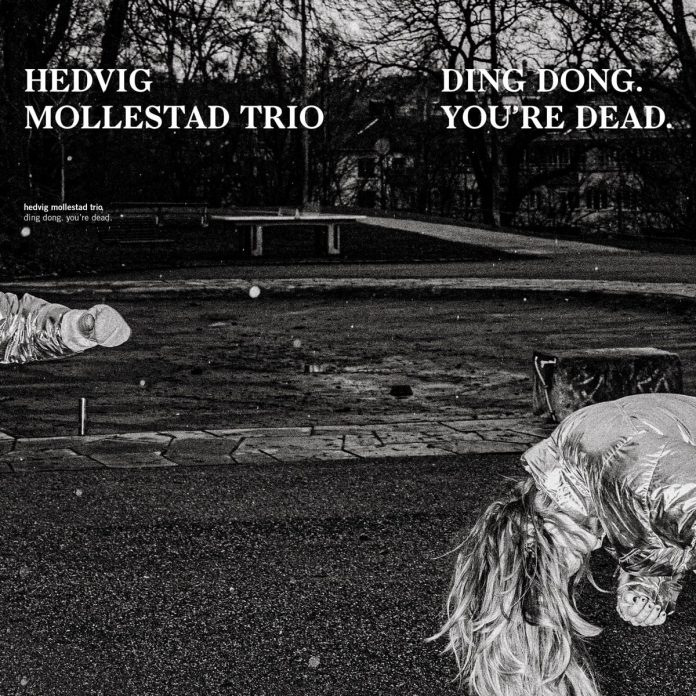 The enhanced assemblage rendered the augmented arrangements closer to something approaching a synthesis of, say, Larry Coryell’s ebullient Eleventh House recordings with the more labyrinthine but no less frenetic expositions of Ornette Coleman’s Prime Time. The net result of Ekhidna was the diversification of tonal colour but without compromising any of her trademark high-velocity dynamics.

Ding Dong. You’re Dead. (sic) is a reversion to the more limited form of her previous trio album Smells Funny (Rune Grammofon, 2018). However, “limited” here only refers to the triadic personnel deployment. The music is, once again, distinctly not limited in terms of its sheer energy and imagination. The opener, Leo Flash’ Return To The Underworld, begins with a distinctly King Crimson-like riff à la Red (Island, 1974) before transmuting into a pulsating ostinato groove. All Flights Cancelled continues in a similar vein, replete with Mollestad’s soaring, echoey, vibrato-rich guitar.

Brekken reverts once more to double bass on Magic Moshroom which serves to emphasise the juxtaposition between the deft, resonant pizzicato notes of the acoustic instrument and the overdriven electric guitar, the net effect being engagingly dramatic. This tack continues on The Art Of Being Jon Balkovitch, the acoustic bass underpinned by Ivar Loe Bjørnstad’s powerhouse drumming and all the while Mollestad’s guitar climbs to the rooftop with sonic arrays of florid notes.

The ballad-like Four Candles concludes the set with ghostly reverberating glissandi, eerie percussion and sonorous bass. In common with so much of Mollestad’s work, this album grips the listener’s attention and never lets go.

John Adcock - 19 August 2019
The title for Uusitalo’s third album could hardly be more fitting. As bassist Myles Sloniker outlines in the liner notes, everything here came about quite organically, with Uusitalo drawing...