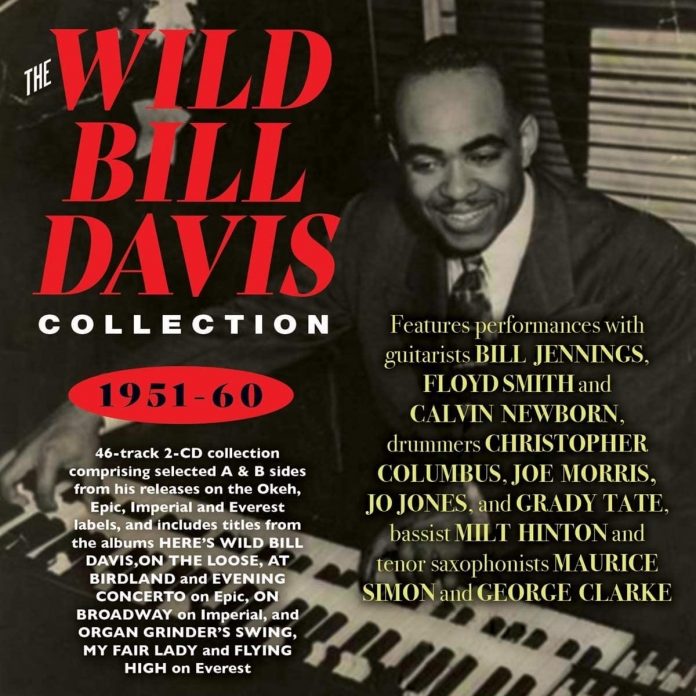 Before Jimmy Smith and a whole host of acolytes became known for their talents on the Hammond B-3 organ the man in the driving seat was Wild Bill Davis, who originally came to prominence as a pianist and arranger for Louis Jordan’s Tympani Five. He subsequently supplied the arrangement for the enduring Basie classic April In Paris in the mid-50s and in 1969 commenced a spell as part of the Duke Ellington Orchestra.

When the first of these tracks were recorded only popular musicians like Fats Waller and Count Basie seemed to have dabbled with the organ, so as a specialist, Wild Bill should be regarded as a serious groundbreaker, even if on a occasion he was capable of veering towards the sound and style favoured by Reginald Dixon at the Blackpool Tower organ.

All of these titles originally appeared on the Imperial, Epic, Everest and Okeh labels and include a number of single releases. Consequently over half the tunes run for less than three minutes. The repertoire takes in show tunes, jazz compositions, standards and blues plus a number of Davis originals.

We are treated to some of the leader’s vocals on occasion, in addition to his keyboard work which evinces none of the elaboration we came to associate with his successors, for he liked to concentrate on getting a fat sound from the electric monster, invariably generating a good deal of swing in the process. In all honesty it is his guitar-playing partners who grab the attention when it comes to the solo department.

This music was ostensibly meant to entertain the listener and for the most part this is exactly what the organist did throughout his career – the tracks taken from his At Birdland album from 1954 really indicate his modus operandi.

Yes, Wild Bill Davis was an original, who is also remembered for those discs on the Verve label he made with Johnny Hodges and for that extra dimension he brought to the Ellington aggregation just a few years before Duke’s death.

Dave Gelly - 21 October 2019
It's just about two years since Leo Richardson's first album, The Chase, left most of us hacks reaching for the superlatives. Rarely had we heard such an assured, accomplished...