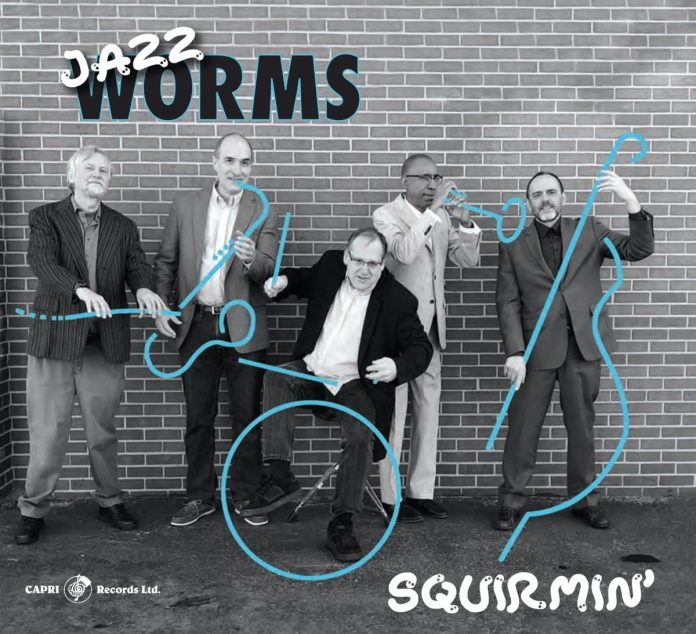 Not often does a group wait 30 years before releasing their second album. Denver’s Jazz Worms, on the other hand, have waited 34. Their debut album, aptly titled Crawlin’ Out, was released in 1987, and the five band members have all worked as professional musicians since then, but the Jazz Worms project halted, except for periodic live performances. For Squirmin’, all the original members return, bringing years of musical skill and creating an excellent record.

Opening with the grooving Launching Pad, the album jumps straight into fast, complex horns in unison, piano vamping, and tight rhythm from bass and drums. The horns and piano improvise, responding to, and weaving in and out of, each other’s lines.

Tracks such as Joaquin and Lickety-Split, on the other hand, follow a much more prewritten format, with a long and intricate unison melody from the horn section that opens and closes the piece. The fifth track, Wheaty Bowl, uses a brilliant stop-start rhythm to open the piece, demonstrating the excellent musicianship of the group.

While much of the album revolves around upbeat, complex tracks and the expert improvisation within, there are also more relaxed moments. What If All? is a delicate, spacious piece, and the following track, Balladesque, opens up after the initial exposition to allow for expressive solos from the horns and piano.

Squirmin’ is a fresh and interesting album that simultaneously stays true to traditional jazz roots. The band have certainly been honing their craft since the 1987 debut, and while it could be argued that wait has been slightly too long, it is well worth checking out.

Fred Grand - 06 March 2022
Parker first came to my attention in the mid-90s as a mainstays of the burgeoning Chicago post-rock scene. He was a founding member of Isotope 217 and Tortoise, groups...