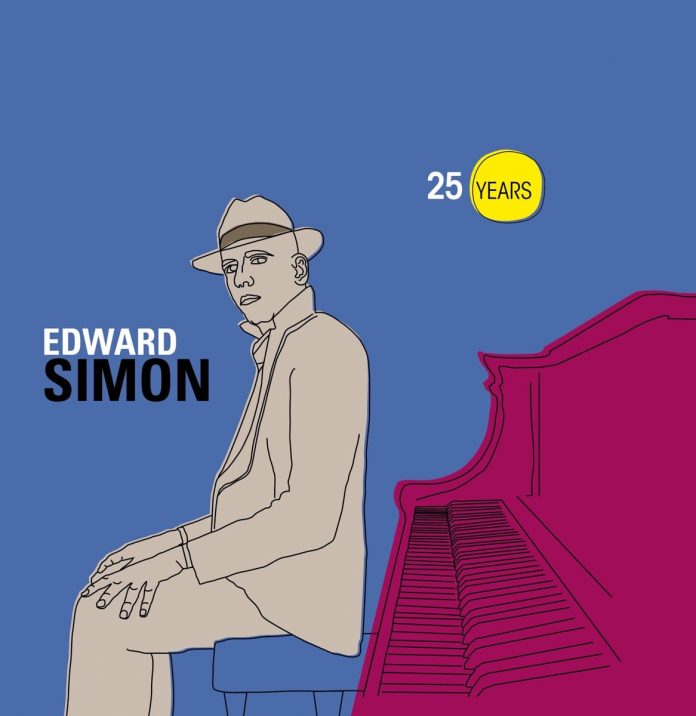 This double-sided digipak presents two CDs with selections of Simon’s music over the past quarter century. Venezuelan born, the pianist plays tracks from a variety of albums from several record companies, all collected into 17 selections. Simon composed most of the music for these recordings and the albums cover much of his musical activity between 1995 and 2018.

Simon has a flowing, fairly light touch all through these pieces and his style is an intriguing mix of bop, Latin American and classical music, the last named most evident in the structure of his compositions and, of course, the way he and his musicians play them.

Erika, the first song here, was written by Simon’s brother Marlon and was the first recording to feature tenor saxophonist Mark Turner, who offers a light but fluid sound on his instrument. Turner is also heard on the next piece, Alma Llanera and again, later, on two compositions on CD2.

What If is a lively mix of jazz and Latin mainly for piano trio but offering a short vocal from Genevieve Artardi towards the end. Aguantando is more of a Spanish melody, introduced by Adam Rogers on acoustic guitar and featuring a rhapsodic Simon. Caballo Viejo offers a Latin ballad with both Simon and Mark Turner playing it quietly and lyrically.

Barinas and Uninvited Thoughts have bass clarinet, flute harp and maracas on the former and bassoon, French horn clarinet and percussion on the latter, to add to the trio and quartet pieces. Two selections for piano, bass and drums follow on and then the Simon ensemble tackle a composition by the pianist from an album featuring music by Ornette Coleman, Monk and Stevie Wonder.

This seven-piece band plays in a boppish, Latin manner and it did leave me wondering what it would have done with a Coleman and a Monk piece mixing free, bop and Latin. Something for another day, that.

Triumph ends the set with David Binney on alto sax, Gretchen Parlato contributing a vocal and the leader on good form at the piano. There is variety in these selections but most of the material is in the Latin jazz style, the result a stimulating and well-played programme of music.

Fred Grand - 27 December 2021
While some musicians may flirt with cross-cultural fusions in a rather superficial way, saxophonist Lena Bloch’s growth as a world citizen has been rather more organic. The native Muscovite...