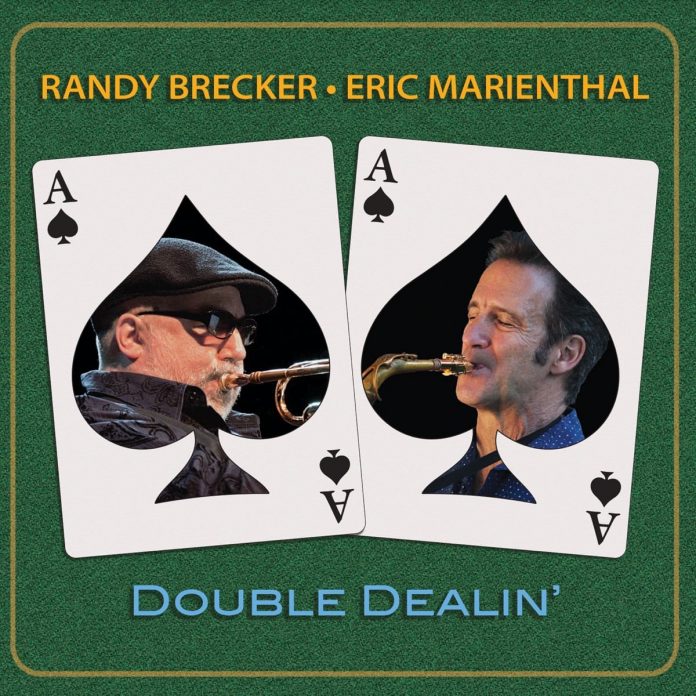 Trumpeter Randy Brecker and saxophonist Eric Marienthal enlist an expert lineup for their latest album, Double Dealin’. Marienthal, John Patitucci and Dave Weckl are usually heard together as veteran members of the Chick Corea Elektric Band, but have all previously worked with Brecker on numerous occasions.

The quartet played together in GRP Records’ All-Star Big Band, formed by the well-known jazz label that also saw Brecker and Patitucci together on Weckl’s 1995 solo album Heads Up. As well as this, Patitucci has also previously worked with Brecker, on Continental Talk in 2009, and on Randy’s brother Michael’s 2007 Grammy winning release Pilgrimage. The ensemble is also joined by keyboardist George Whitty, who has recorded and toured with both of the Brecker brothers for a decade or two at least.

The experience these musicians have together certainly brings a unity and flow to the album, the sort of thing only achievable after countless hours recording and performing together. Their cohesion generates complex, engaging tracks that move between jazz, funk and fusion. Some of the tracks have a distinctly 90s RnB atmosphere, with muted, lo-fi drum kit and soft pad providing harmony, such as on 3 Deuces, whereas others, like Jetlagged, are more reminiscent of the modern jazz of the 80s. One particular highlight, Sambop, uses a more traditional jazz chord progression as a vehicle for demonstrating the musicians’ proficiency, with slapped bass from Patitucci, and extensive improvisation by Brecker and Marienthal.

While such stylistic influences do make some of the tracks seem quite dated, in others they accentuate and strengthen them, recalling the era in which the band’s members first established themselves as world-class musicians. The third track, Fast Lane, invokes the 1980s funk/fusion influence in jazz that was so integral to some of the band member’s discography, especially Brecker’s. Overall, if you enjoyed any of Brecker’s previous work, then you’ll definitely find something you like on Double Dealin’.

Nic Jones - 07 September 2021
The most notable qualities of this set are the balances finely struck between tentativeness and assertiveness, between reflection and improvisatory fire, both of which effectively serve to place it...

Steve Voce - 18 July 2022
The compact disc was first made available to us in 1982, half a lifetime ago. LPs persisted alongside the new medium until the majority of people had managed to...