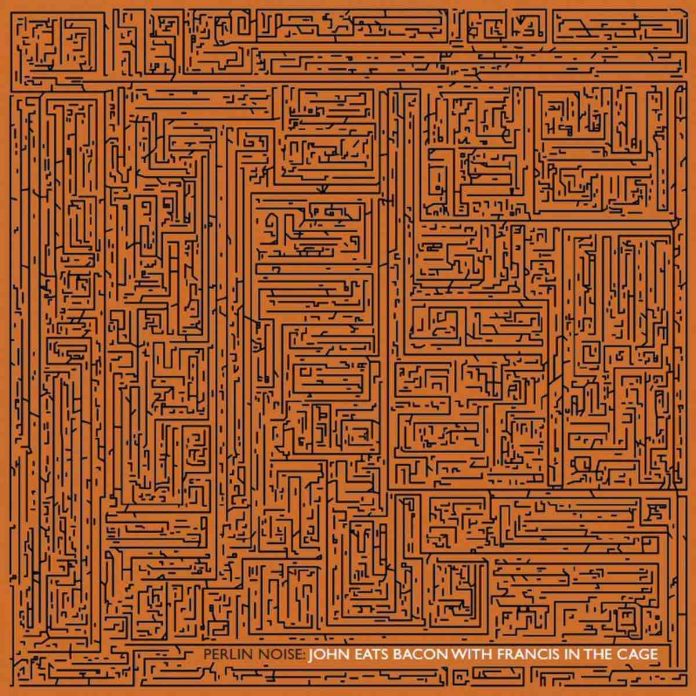 Perlin Noise is an algorithm allowing computer graphics artists to represent the complexity of natural phenomena in visual effects and is often used in the creation of computer-generated visual elements. (That’s what it says here.)

Two immediate questions are raised, the first combined: (1) Is John eating the bacon having selfishly put Francis in the cage (out of the way) or are they both in there eating it together in some kinky hamfest? (2) Is jazz the result of translating the aforementioned visual elements into music?

The answer to the first – a reasonable or fatuous query depending on your mood – is neither here nor there. The answer to the second is problematic. Including a sax and a drum kit in a small combo, or even just the kit, suggests the source of a jazz vibe, however obscured it becomes in creating air waves.

The virtuosic bass (Alessandro Vicard, the album’s composer) that launches Cellula and the polyrhythmic drum thunder, possibly overdubbed, that sets Melodia in motion wear the vestments of contemporary jazz. But that’s where the vibe appears to end, apart from faint echoes discretely placed. Unless, that is, jazz now has to be pursued into still-strange territory.

Barocco might begin in calm “baroque” fashion and end peacefully but any historical connotations are lost in a central abyss of free improv chaos (bearing in mind that molto agitato “chaos” in contemporary music is often controlled and structured in intention if not in notation).

The solemn-sounding Il Moto Dei Corpo is also a three-parter. The title track is an assemblage of detached sounds that grow into a collective manic choir on the march, and Melodia, the longest track, gets its unison melody in early before all gives way to the lengthy, eerie musings of the piano.

Maybe jazz and contemporary “classical” music combined have come to this. It’s not Buddy Bolden; but, then, it’s not Cecil Taylor either. Always worth debating.

Click here to buy or find out more about Perlin Noise Quintet: John Eats Bacon With Francis In The Cage

From the very first listen this record seems typically Italian: Breezy clarinet and piccolo improvisations by Gianluigi Trovesi over the rich timbre of Gianni...

As a child Barney Bigard had at first resisted his family's attempts to point him to a career in music, choosing on his own...

These days Pete Christlieb is likely as not found in his spacious garage, working on a dragster, a passion he has indulged for some...