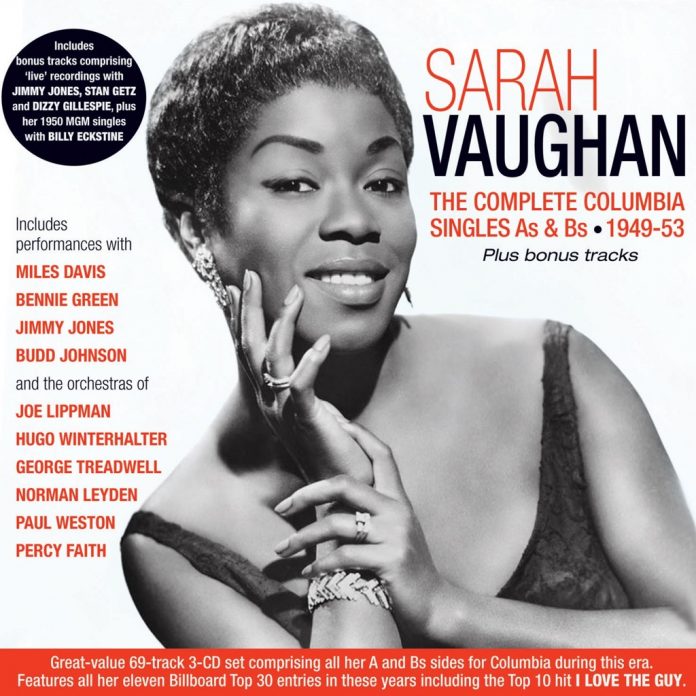 Card-carrying Vaughanistas will generally applaud this three-CD package of Columbia recordings which include her 11 Billboard Top 30 hits. Sassy-Puritans will pale at many of the string-laden and banal songs (some imposed on her by the dreadful Mitch Miller), but will enthuse over the few genuine jazz-inflected sessions on this 69-track set.

Even her most ardent admirers concede that Sarah’s tenure with Columbia was not the apogee of her career. Like Billie Holiday, she could invest trite lyrics with genuine emotion and conviction, but such titles as My Tormented Heart, Whippa Whippa Woo, De Gas Pipe, She’s Leaking, Pinky, Sinner Or Saint, A Miracle Happened, A Lover’s Quarrel and Out Of Breath are not among her best performances.

That said, what Scott Yanow has called “one of the most wondrous voices of the twentieth century” could even recite a phone directory and put her indelible stamp on it. Fortunately, a few of her Columbia singles were sublime. Listen to (pre-Peggy Lee) Black Coffee, I Cried For You, Summertime, Just Friends, The Nearness Of You and Spring Will Be A Little Late This Year. Sarah herself has been quoted as saying: “I don’t know why people call me a jazz singer, though I guess people associate me with jazz because I was raised in it, from way back”. Gary Giddins defined her as the “ageless voice of modern jazz – of giddy post-war virtuosity, biting wit and fearless caprice”.

Things certainly began to improve when she was backed by jazz musicians. Two 1949 Carnegie Hall performances – Once In A While and Mean To Me – with Jimmy Jones as accompanist, illustrate the point. On 1950 studio dates with her then husband George Treadwell and accompanied by such stars as Miles Davis, Bennie Green, Budd Johnson, and Tony Scott, she delivers spirit-lifting interpretations of classic songs – Ain’t Misbehavin’, It Might As Well Be Spring, East Of The Sun and Come Rain Or Come Shine. On a playful Nice Work If You Can Get It, she affects a “little girl” voice before Davis contributes a plangent solo.

An intriguing “bonus” track, Embraceable You, has Sarah at the Salle Pleyel in Paris in 1953, nominally with the Dizzy Gillespie quartet, none of whom are audible until the end. The last four tracks feature Sarah in 1949 with her guide and friend Billy Eckstine and the Joe Lippman Orchestra. Not as celebrated as their later duets – Passing Strangers was a UK Top 20 hit in 1957 – they are very listenable, particularly Dedicated To You.

As the astute Gary Giddins also observed, The Divine One had a “voice that happens once in a lifetime, perhaps once in several lifetimes”. We should rejoice that it happened in ours.

Discography
CD1: Bianca; Black Coffee; As You Desire Me; Tonight I Shall Sleep With A Smile On My Face; While You’re Gone; Make Believe; Give Me A Song With A Beautiful Melody; That Lucky Old Sun; Fool’s Paradise; Lonely Girl; I Cried For You; You Say You Care; I’m Crazy To Love You; Summertime; You Taught Me To Love Again; Just Friends; Our Very Own; Don’t Be Afraid; East Of The Sun; Ain’t Misbehavin’; Nice Work If You Can Get It; Goodnight My Love; Come Rain Or Come Shine (69.27)
CD2: Can’t Get Out Of This Mood; Mean To Me; It Might As Well Be Spring; I Love The Guy; Thinking Of You; Perdido; Whippa Whippa Woo; The Nearness Of You; You’re Mine You; De Gas Pipe, She’s Leaking, Joe; I’ll Know; Ave Maria; A City Called Heaven; Deep Purple; These Things I Offer You; Vanity; My Reverie; After Hours; Out Of Breath; Just A Moment More; I Ran All The Way Home; A Miracle Happened; Pinky (69.17)
CD3: Corner To Corner; If Someone Had Told Me; Street Of Dreams; Time To Go; My Tormented Heart; Say You’ll Wait For Me; Mighty Lonesome Feelin’; Sinner Or Saint; A Lover’s Quarrel; I Confess; Spring Will Be A Little Late This Year; A Blues Serenade; Linger Awhile; Time; Once In A While (Live); Mean To Me (Live); My Gentleman Friend (Live); You’re All I Need (Live); Ev’ry Day (I Fall In Love); I Love You; Dedicated To You; You’re All I Need (65.54)
Vaughan (v) with orchestras led by Joe Lippman, Hugo Winterhalter, Percy Faith and Paul Weston, New York, 1949-1953, and small groups including Miles Davis, Tony Scott, Bud Johnson, Jimmy Jones (New York, May 1950); Stan Getz, Zoot Sims, Gerry Mulligan (New York, 17 August 1950); Dizzy Gillespie (t); Bill Graham (bar); Wade Legge (p); Lou Hackney (b); Roy Haynes (Paris, 9 February 1953).
Acrobat Music ACTRCD9090

Gareth Thomas - 15 July 2021
The late 60s and early 70s were an important time in the development of jazz in Japan. A shift was taking place, from the "funky boom" movement characterised by...