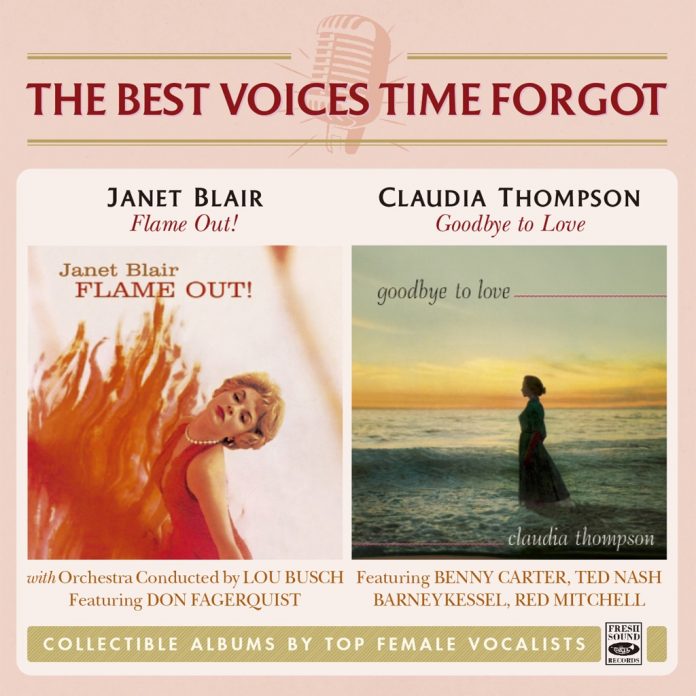 In its mission to rescue long forgotten or never widely known or appreciated singers from undeserved neglect, the Fresh Sound label is now not so much mining a rich seam as it is casting a light on to unassuming worlds which, while they will always register in the seemingly ever buoyant nostalgia market, still have an effect which resonates in these fraught times for the ways in which they offer fresh insights into often now venerable songs.

The original liner notes to Flame Out! are reproduced in this release, and from them we learn that Janet Blair was a vocalist with the Hal Kemp band in the 1940s, which affords only scant insight into how she came by the interpretive wealth she brings to the album’s hardly under-exposed songs, the high profiles of which have the effect of casting a bright light on Blair’s individuality, with her clear diction and avoidance of emoting making her reading of Glad To Be Unhappy a nice vocal counterpart to Paul Desmond’s alto sax take on it. She does nuance too, and again with a fine balance, on I Get Along Without You Very Well, where Lou Busch’s orchestration raises the interpretation to a level that would have made the late Alan Dell’s ears prick up.

Thompson was once billed as the “voice you can’t forget” apparently, so the irony of her appearing in a series entitled The Best Voices Time Forgot isn’t lost on yer actual jazz hack. For once there’s reason to believe the hype too, up to a point, because Thompson sings in a manner both controlled and capable of getting something out of a lyric. Her lack of showiness is best exemplified by the none-more-venerable Body And Soul, where her accompaniment is tellingly limited to Kessel and Mitchell.

The fact that overall Thompson blends so seamlessly with Kessel, Mitchell and the likes of Benny Carter and Alvin Stoller says much about her vocal sensibility, and in common with Blair she possesses one of those voices that fit the Fresh Sound billing very nicely.

Discography
[Flame Out!] (1) Get Out Of Town; Autumn Leaves; Glad To Be Unhappy; They Can’t Take That Away From Me; Good Morning Heartache; The Gentleman Is A Dope; Don’t Explain; I Get Along Without You Very Well; Do Nothin’ ’Till You Hear From Me; Then You’ve Never Been Blue; In Love In Vain; Lover Man [Goodbye To Love] (2) Some Of These Days; Body And Soul; If I Should Lose You; Stormy Weather; I’m Through With Love; The Morning After; Goodbye; Blue Prelude; You Call It Madness; Fan Me; I Was Yours; Gloomy Sunday; Goodnight My Pet (77.04)
(1) Blair (v); Don Fagerquist (t); Paul Horn (f, as); Bud Shank (f, as); Jimmy Rowles (p); Tommy Tedesco (g); Joe Mondragon (b); Shelly Manne (d). Orchestra arranged and conducted by Lou Busch. Hollywood, 1959.
(2) Thompson (v); Benny Carter (as); Ted Nash (as); Arnold Ross (p); Paul Smith (p); Red Mitchell (b); Alvin Stoller (d). Hollywood, January 1959.
Fresh Sound Records FSR V118