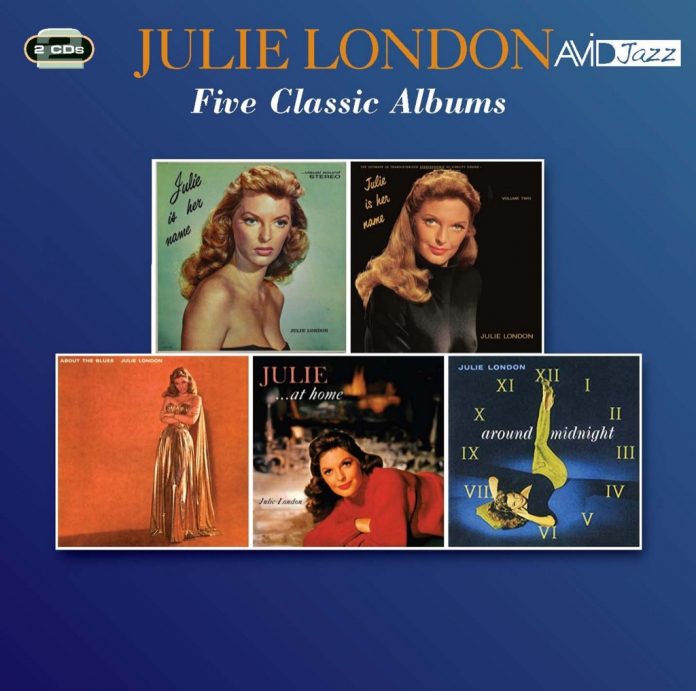 The widely recorded London (1926-2000) was accorded an appreciative paragraph in the first edition of Leonard Feather’s Encyclopedia Of Jazz, where she was characterised as “a warm and intimate singer who has frequently used jazz-oriented backgrounds under [her husband, Bobby] Troup’s supervision”. But she was dropped from Feather’s following Encyclopedia Of Jazz In The Sixties and The Biographical Encyclopedia Of Jazz (the last co-edited by Ira Gitler). And she doesn’t feature in subsequent reference works like The New Grove Dictionary Of Jazz.

Why this should be? Did various editors feel that, successful singer that London was, she had acquired quite enough fame for herself in her parallel career as a Hollywood actress? Or – equally uncharitable thought on my part – did the jazz police decide that the vocalist whose favourites included Ella Fitzgerald, Peggy Lee and Johnny Mercer didn’t quite cut the mustard when it came to whatever such guardians and gatekeepers of the jazz flame deemed “the real deal” in jazz singing?

Today, when the appellation “jazz singer” is so widely bestowed, it’s high time to acknowledge once again London’s unarguable place in jazz history. Yes, she wasn’t Ella, Billie or Sarah, Betty Carter or Jeanne Lee, Irene Kral or Cleo Laine. No, she didn’t scat wildly, triple the tempo, deconstruct harmony or phrase way off the beat. What she did offer, in elegant and ultra-consistent spades, was unforced yet potent vocal pleasure, her rhythmic, harmonic and melodic assurance respecting and interpreting a lyric with both lucidity and no little feeling. And, as these 60-plus tracks document (with fine sound quality) what an astonishing range of material she could handle, including many a blues.

The music kicks off with London’s big mid-50s hit Cry Me A River, the coda of which features some brief and eerily effective studio fade-out – complemented by the faded-in introduction to Basin Street Blues on the 1957 About The Blues. The arrangements run from the trio sessions of the two volumes of Julie Is Her Name, featuring Barney Kessel and Ray Leatherwood, and Howard Roberts and Red Mitchell, all in crisply delicious form, to the larger and atmospherically voiced ensembles led by Bobby Troup, Russ Garcia and Dick Reynolds. Best of all, perhaps, is the spot-on sextet featured on the 1960 At Home. That excellent pianist Jimmy Rowles – who knew a thing or two about “the real deal” in jazz – comments in his sleeve-note (reproduced here, along with the other original albums’ sleeve-essays) that London “uses her voice like an instrument – warm and easy without self-consciousness […] I enjoyed myself so much I almost felt guilty about accepting the check”. I’d go with Mr Rowles, any day.

Discography
CD1: [Julie Is Her Name] (1) Cry Me A River; I Should Care; I’m In The Mood For Love; Can’t Help Lovin’ That Man; I Love You; Say It Isn’t So; It Never Entered My Mind; Easy Street; ’S Wonderful; No Moon At All; Laura; Gone With The Wind; [Julie Is Her Name vol 2] (2) Blue Moon; What Is This Thing Called Love; How Long Has This Been Going On; Too Good To Be True; Spring Is Here; Goody Goody; The One I Love Belongs To Somebody Else; If I’m Lucky; Hot Toddy; Little White Lies; I Guess I’ll Have To Change My Plan; I Got Lost In His Arms;[About The Blues] (3) Basin Street Blues; I Gotta Right To Sing The Blues; Get Set For The Blues; Invitation To The Blues; Bye, Bye Blues; Meaning Of The Blues (78.01)
CD2: About The Blues; Sunday Blues; The Blues Is All I Ever Had; Blues In The Night; Bouquet Of Blues; [At Home] (4) You’d Be So Nice To Come Home To; Lonesome Road; They Don’t Believe Me; By Myself; The Thrill Is Gone; You’ve Changed; Goodbye; Sentimental Journey; Give Me The Simple Life; You Stepped Out Of A Dream; Let There Be Love; Everything Happens To Me; [Around Midnight] (5) ’Round Midnight; Lonely Night In Paris; Misty; Black Coffee; Lush Life; In The Wee Small Hours Of The Morning; Don’t Smoke In Bed; You And The Night And The Music; Something Cool; How About Me; But Not For Me; The Party’s Over (79.45)
London (v) with (1) Barney Kessel (elg); Ray Leatherwood (b), Los Angeles, October 1955, January 1956. (2) Howard Roberts (elg); Red Mitchell (b). Hollywood, July 1958. (3) Russ Garcia Orchestra, Hollywood, May 1957. (4) Jimmy Rowles (p); Al Viola (elg); Bob Flanigan (tb); Emil Richards (vib); Don Bagley (b); Earl Palmer (d). Los Angeles, 4 March 1960. (5) Dick Reynolds, arr. & cond., Los Angeles, August 1960.