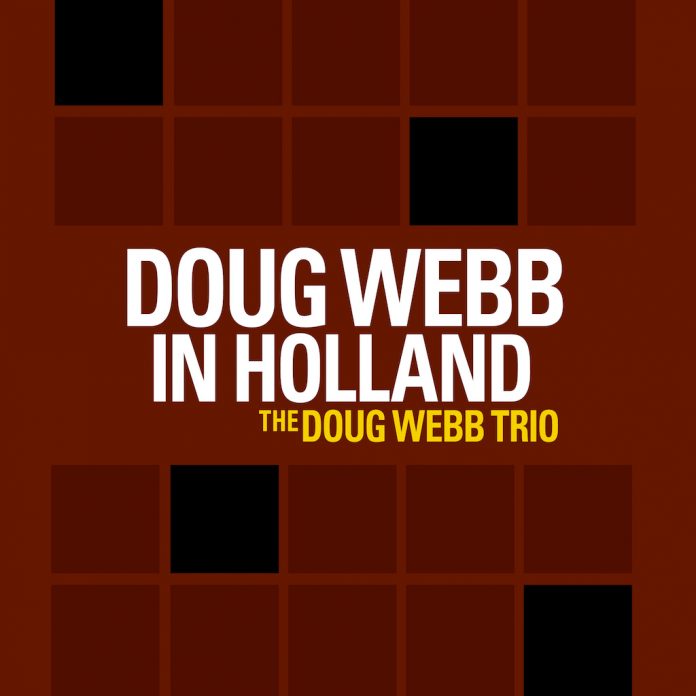 A well-regarded tenor soloist who has worked with many top band leaders, including Horace silver, Quincy Jones, Freddie Hubbard and the Bill Holman Orchestra, Webb here links up with two thirds of the top Dutch rhythm section for a programme of six hardy standards and four of his own compositions.

In 2015 Webb toured Holland with Rein de Graaf’s trio which included Marius Beets on bass and drummer Eric Ineke. This 2018 session finds him linking up with the bass and drum men but without de Graaf. Webb claims that he prefers playing in a trio like the one heard on this release claiming that it gives him maximum freedom of expression.

The opening track here is a sturdy blues which he plays in a headlong manner much like a major inspiration: John Coltrane. Showing much skill and versatility he then launches into the Lee Konitz line Subconscious Lee, where his tenor sound is light and airy, much in the tradition of the Lennie Tristano school. It is pure improvisation for five minutes, as indeed was the 254 W. 82nd Street which preceded it but in a much different style.

Continuing the exploration of pure improvisation, Delilah and the pop song Invitation are good examples of Doug Webb at his most inventive. He seems able to change the tone of his saxophone to fit the type of jazz piece as he plays it and the most notable is his hard-edged sound on the opener contrasted with his Warne Marsh approach on Subconscious where his tenor takes on an alto hue. He also manages an alto sound of a different persuasion on Ornithology where he digs deeply into the bop language. Spring Can Really demonstrates that he is no slouch when it comes to ballad playing.

This is an attractive release which gains considerably from the strong support given by Beets and Ineke. These two, along with their usual leader, de Graaf, are among the very best rhythm section musicians in Europe and their solo and section work helps to propel this set into a winning, swinging 50 minutes of jazz. Beets also doubled as recording engineer and has produced a well-balanced sound recording.

Roger Farbey - 10 March 2019
This is Nick Malcolm’s third album. His debut, Glimmers (FMR, 2012) was well-received and the follow-up, Beyond These Voices, was released on the trumpeter’s own Green Eyes label in...