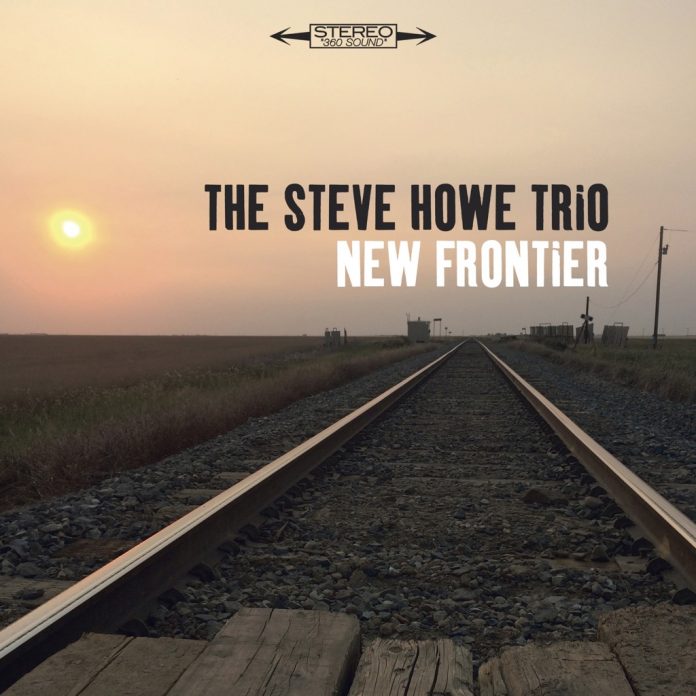 On one hand, the Steve Howe Trio is a standard jazz organ trio. On the other hand, it isn’t. The difference is the presence and style of guitarist Howe Senior – alongside his son Dylan on drums and Ross Stanley on organ.

Steve Howe is best known as the guitarist with Yes, Asia, GTR and other million-selling bands: a guitarist with a distinctive sound and a fondness for Gibson model instruments. Less well known is his love of Kenny Burrell’s music, which has informed his playing over the years and is most noticeable here on Howe’s solos.

New Frontier is the Steve Howe Trio’s third album since it formed in 2007, but its first for nine years. With each member having busy careers with various other combinations, the gap is hardly surprising. The album contains 10 original instrumentals: Steve Howe wrote or co-wrote all of them, Stanley and Dylan Howe get two co-credits each. Yes fans might be particularly interested to hear that three tracks – Fair Weather Friend, Gilded Splinter and The Changing Same – are co-written by Steve Howe and drummer Bill Bruford.

The mix of classic prog and classic jazz guitar produces consistently enjoyable music that makes few demands of the audience but repays careful exploration with some notable melodies and fine musicianship.

Hiatus – a Steve Howe/Stanley tune – and Steve’s Left To Chance have immediately recognisable prog ancestry, although the latter soon switches into funkier territory. Howe’s guitar playing – usually on his beloved Gibsons but occasionally on Fender Telecaster with a spot of Fender Precision bass to underpin a couple of Dylan’s solos – by no means overshadows Stanley or Dylan Howe’s playing. The three share the solo honours and spread the rhythm duties pretty evenly across the album.

Derek Ansell - 24 March 2021
Oppenhagen plays electric guitar with various assorted electronic effects and has a line up here with keyboards, double bass, drums and two percussionists on board. The music is of...