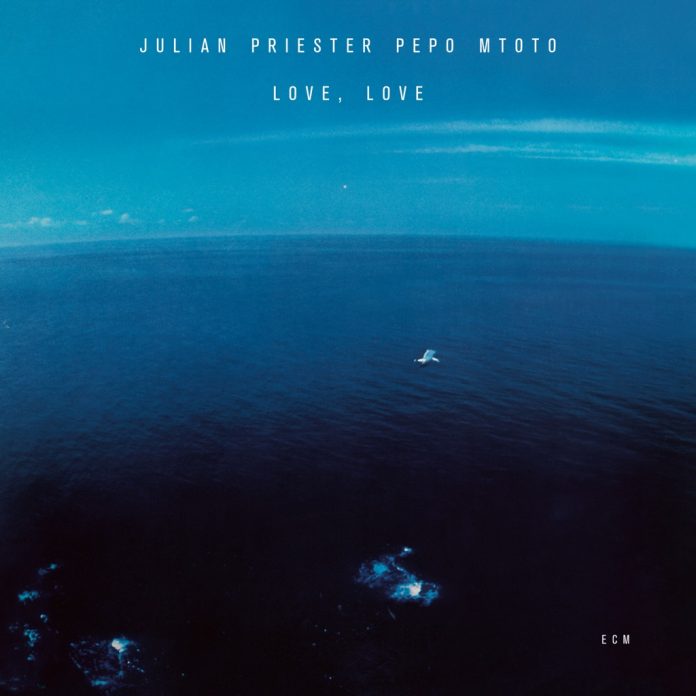 In recent years, Blue Note has been repressing its catalogue to much acclaim. ECM has followed suit in 2017 and 2019, 50 years after the founding of the influential, independent label by Manfred Eicher. If Blue Note signifies warm, transparent mainstream, soul jazz and (portions of) avant-leaning jazz, ECM owes its reputation to austerity, mystery and a rich, relentless variety of free conceptions and means of expression. Among others, it has reissued Keith Jarrett’s Standards Volume 1 and Pat Metheny’s Watercolors. ECM has also brought back Julian Priester’s Love, Love, a praiseworthy effort that renders obsolete the search for a vintage vinyl copy of the trombonist’s hybrid of fusion and sound collage from 1973. Fine and dandy, but whereas many of ECM’s classic albums sound fresh as a daisy, Love, Love’s electronic experiments haven’t exactly stood the test of time.

Trombonist Julian Priester, 83 years old and still active as a teacher in New York City, is an audacious, versatile artist. Undisturbed by genre boundaries, Priester has been involved in both mainstream and avant-garde jazz from the start of his career in the 50s. Featured on many essential albums by Max Roach, Priester also played on a number of hard-bop dates on Blue Note and held the trombone chair in the Duke Ellington big band in the early 70s. At the same time, he was part of the Sun Ra Arkestra from 1956 to 1995. Furthermore, Priester was a member of Herbie Hancock’s groundbreaking Mwandishi group.

The Mwandishi outfit and the release of Bitches Brew by Miles Davis undeniably influenced Priester here, who adorned himself with the African monicker of Pepo Mtoto and plays his customary trombone as well as a variety of instruments like flute and ARP synth. The aural palette further includes saxophones, bass clarinet, clavinet, Fender Rhodes and Moog. The mood of Love, Love’s two long compositions is sinister, the music esoteric. It is impassable as well, like the jungle of Borneo. For those who like to handle the machete in pitch-black darkness, Love, Love is the place to go.

The tight-knit combination of the plain bass riff and funky drum pattern is at the heart of the title tune, Love, Love. Devoid of harmonic movement, let alone dynamic development, it has members of the group chiming in rather randomly with noodling synth here, fragments of flute there. Guitarist Bill Connors moves in and out of the monotonous groove with an interesting blend of fluency and angularity, but notwithstanding that, the participants resemble tourists who are in the middle of a bad trip and trashing the furniture of the hotel room. Priester’s fascination with shifting sounds is the most interesting aspect of Love, Love.

Images/Eternal Worlds, if ultimately unsatisfactory, is more rewarding. It is kick-started by a penny plain, bouncy melody line, which segues into a spooky groove and Eastern-flavoured, danceable rhythm pattern. The voltage is increased by the turbulent climax. The remaining cluster of notes, which completes the arc of Priester’s attempt at a fusion jazz suite, is empyreal. Finally there is a bit of room for the cushion-soft trombone sound of Julian Priester. It is his trombone playing that reveals moments of simple, sincere beauty, which sound curiously out of place in Love, Love’s blocked-up wall of sound.

John White - 18 May 2020
With jazz – lite and trite, near and drear, pretentious and tendentious - seemingly on the increase, the reissue of five “classic” Parker Verve albums (even in truncated form)...