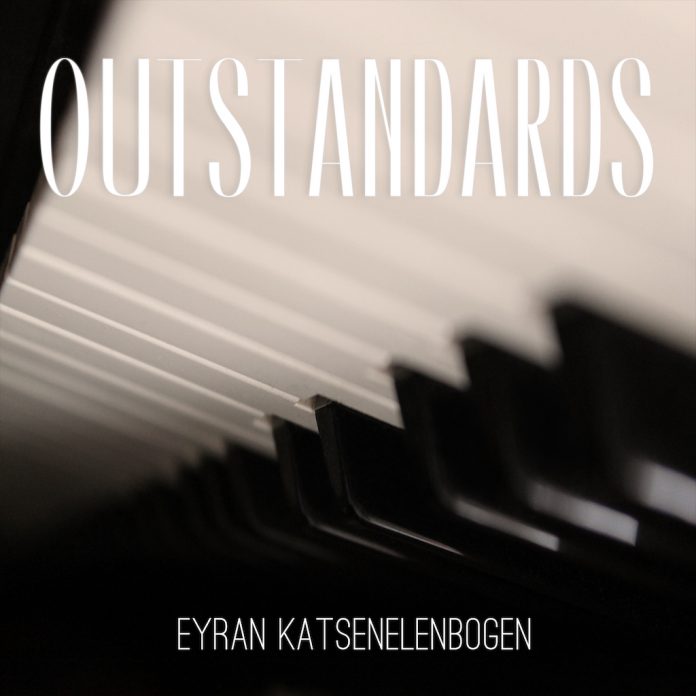 Israeli-born pianist Eyran Katsenelenbogen has attracted high praise for his work, Jay Deshpande at All About Jazz suggesting he is “most in league with Art Tatum … he sets the bar towards which other pianists must strive”. Now Katsenelenbogen has issued a new solo piano album, Outstandards, which takes a jazz perspective on some European classics, the Great American Songbook and some modern standards.

A classically trained pianist with a jazz style, Katsenelenbogen has performed and recorded at venues including the Iridium Jazz Club, New York, Teatro di Marcello, Rome and the Saint Joseph Theatre, Scarborough. He also performed at various Chinese venues during his 2014 “Piano Fight” tour with fellow pianist Tal Zilber. In addition to solo and duo touring, Katsenelenbogen has appeared with his “Pictures At An Exhibition: Classical Meets Jazz collaboration” with Russian classical pianist Andrei Ivanovitch.

In Outstandards, Katsenelenbogen presents jazzy renditions of classical cornerstones such as Für Elise (Beethoven) and Mozart’s Piano Sonata in C major, alongside jazz classics such as Tea For Two (Youmans/Caesar) and Cheek to Cheek (Berlin). Katsenelenbogen also revisits Chick Corea’s Armando’s Rhumba, which featured on his CD Solotude in 2005, and delivers an intimate performance of Insensatez (How Insensitive) (Jobim/De Moraes). Insensataz carries a special meaning for Eyran and is dedicated to his parents in gratitude for their eternal love, reflecting Frank Rubolino’s observation in Cadence that “he is a passionate man who feels deeply, and he has the talent to express those feelings through his playing. You can not help but be moved by his performance”.

Well regarded in the academic world, Katsenelenbogen has since 1996 held a faculty position at the New England Conservatory of Music (NEC), where he trained alongside Ran Blake, Paul Bley, Fred Hersch, Danilo Pérez, George Russell and Gunther Schuller. He has specialised in pioneering techniques for teaching improvisation to students with special abilities and diverse needs and thanks his students for inspiring much of the work on Outstandards. The Outstandards project was made possible with funding from the NEC.

The full track listing is: Libertango; Für Elise; Sonata No. 16 in C major K. 545: I. Allegro; Prelude in C-sharp minor Op. 3, No. 2; Hungarian Dance No. 5; Cheek To Cheek; Tea For Two; Prelude in C minor, BWV 847 and Improvisation; Armando’s Rhumba; Theme For Ernie; Insensatez (How Insensitive); Chega De Saudade (No More Blues); The Windmills of Your Mind; Just You, Just Me.

This article was produced with the assistance of the artist

The NJA: ‘At its best jazz is an art in which black and white musicians work together’

Radio 3 has its say on jazz as struggle

Chris Botti for London in May

Gateshead Jazz 2020: the future is Brit

Mark Youll - 05 August 2019
Like countless other players from New Orleans, Herlin Riley’s roots and approach to the drum set are clearly rooted in his early connection to the church. He...

Bruce Crowther - 24 February 2020
While not many things are certain in this life, I know that everyone reading this has heard the voice of Jimmy Bryant, even if the name is...

Jazz Journal - 28 September 2019
I have a friend who has been desperately searching for a copy of Le Jazz Hot, a BBC 2 programme that went out in January 1987.

Nigel Jarrett - 29 May 2020
Bill Beuttler's interesting and timely book, in its format at least, is a 21st-century counterpart of Joe Goldberg's Jazz Masters Of The 1950s, published in 1965. Both...

Jazz Journal - 28 February 2020
If CDs have a purpose, it is to re­cycle material like this: two clas­sic albums that on vinyl dis­appeared from all but the secon­dhand bins many years...

Geoff Wills - 13 May 2019
When film music historians discuss the increasing influence of jazz on movie soundtracks through the 1940s and into the 1950s, they usually mention films like The Best...