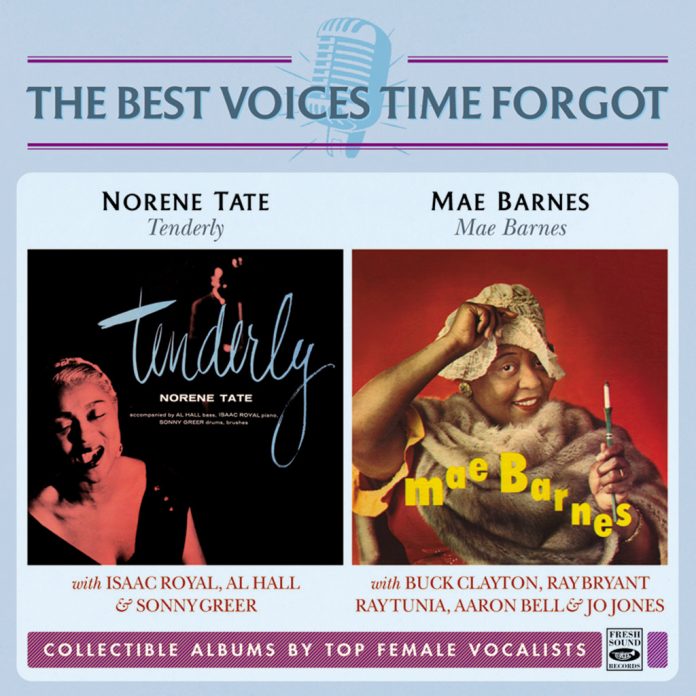 Here we have another pairing of vocal albums from Jordi Pujol’s Fresh Sound series The Best Voices Time Forgot. The link between these two singers, Norene Tate and Mae Barnes, seems to be their contrasting and individual interpretations of show tunes, ballads and torch songs. They also both appeared at the Bon Soir in Greenwich Village, a fashionable club where, according to the New York Times in 1960, it was so dark the waiters had to carry flashlights up their sleeves to see who needed a refill, creating the effect of a room full of glow worms.

Norene Tate gained a reputation as a fine pianist, but this features her as vocalist. Accompanied by a highly accomplished trio of pianist Isaac Royal, bassist Al Hall and Duke Ellington’s drummer, Sonny Greer, she goes through a typically nightclubish repertoire, slightly dated in style and only occasionally jazz influenced, but often emotional and tear-jerking. However, the track Conversations is interesting for its social implications and the Isaac Royal composition The Wail stands out for its haunting and dramatic delivery.

Another connection between the two singers is Buck Clayton. In his book Buck Clayton’s Jazz World (1986) he wrote that “Norene influenced me very much. I used to listen to her play when I was very young”. At school he would listen to her practising while he was in class – “I could hear her at the piano … I couldn’t study. All I could do was listen to her play”. She later joined a small combo – “that little band influenced me also”. A pity she isn’t playing piano on this, although Royal is a proficient enough substitute.

Clayton features on the Mae Barnes album, in a first-rate support band that includes the bluesy piano of Ray Bryant and is driven by drummer Jo Jones. A contrast to the Tate material, this is altogether more upbeat and direct with some beautifully muted solos by trumpeter Clayton. An all-round entertainer, Barnes had a career that included being responsible for introducing the Charleston to Broadway in the 1924 revue Runnin’ Wild, being described by Bill Bojangles Robinson as the greatest living female tap dancer, performing in the Ziegfeld Follies and holding a seven-year residency at the Boite in Greenwich Village. A period in London in 1950 saw her taking the lead in Jack Hylton’s revue, Knight Of Madness and she appeared regularly at New York’s Apollo Theatre.

On these tracks she moves easily between show tunes and more R&B-influenced material. She has a lively rhythmic delivery with obvious enjoyment for the songs, bending notes, using occasional scat and irreverent interpretation.

François van de Linde - 23 August 2021
They don’t make headlines in the Wire nor wear colourful kaftans in public parks. But nobody beats the veteran interpreters of John Coltrane. England cherishes Alan Skidmore while the...