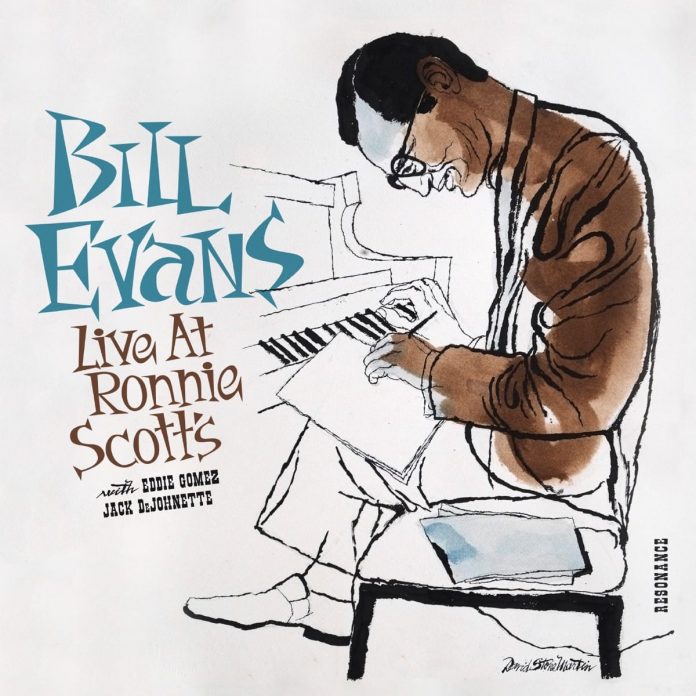 The 1968 Evans engagement at Scott’s has often been discussed by enthusiasts, but it was a long time before serviceable tapes were discovered and brought out. Drummer Jack DeJohnette had what he described as “a hip recorder at the time”. He placed his multi-track machine in the piano, and it produced sound that was good enough if not quite up to the best technical equipment available. The music, though, was special.

If this session fails to reach the heights of Evans’ classic discs recorded by Riverside at the Village Vanguard in 1961, it does not fall far short. Evans was booked for a month-long engagement and he was comfortable and relaxed, according to bass player Eddie Gomez. And when Evans was in that situation he produced his best music. That is what happened here.

This was arguably Evans’ best and most cohesive trio since the untimely death of bassist Scott LaFaro soon after the Vanguard gig. Eddie Gomez had been with the pianist for two years and had settled in well, taking easily to the fully integrated trio style that Evans had almost perfected with LaFaro and drummer Paul Motian. On these discs he plays virtuoso solos that glide out of the trio easily as he keys in with Evans’ piano and DeJohnette’s drums.

Third man DeJohnette was key to the success of the trio as he was more assertive than Motian and frequently pushes Evans on these pieces, just enough to get him moving but backing off to quiet brush accompaniment during the slower, more lyrical piano excursions. He was also well suited to supply the ideal fills and cymbal splashes that energised the pianist and, as Evans himself put it, “he’s getting me off my musical ass”. All this is apparent on first listen to these recordings.

The individual tracks bear out what the rhythm players say in the liner notes. Two versions of Emily have Evans beginning very slowly, producing those glittering, crystal-like notes with the rhythm players gliding quietly behind him. Then they up the tempo and begin to swing it, pushing Evans a little and getting him to come up with some freshly improvised lines. This happens again on Waltz For Debbie and Autumn Leaves.

Someday My Prince Will Come is an uptempo romp that roars along culminating in a series of exchanges between Evans and DeJohnette. Evans turns Embraceable You over to Gomez. He begins with an out-of-tempo statement and then plays the melody through straight, improvises on it and completes it. Evans adds very little to this track.

Even Very Early and Nardis sound different on these versions and again, like many others, Evans begins quietly, adds an uptempo middle section and finishes quietly. My Man’s Gone Now is played in lyrical manner but also benefits from a faster middle section. As he had been at The Vanguard, Evans, together with his sidemen, was in a musical comfort zone and with a four-week gig, settled in ideally.

Resonance have mastered this music well, courtesy of sound man Bernie Grundig and brought to life an important programme of one of Evans’ best trios. The music is clear and with a minimum of distortion on CD but if you want that extra warmth from the bass and sparkle from drums and cymbals the vinyl – in a limited edition of 7000 copies – is the best bet.

The comprehensive booklet has essays or interviews with Brian Priestley, Gomez, DeJohnette and comedian/actor Chevy Chase. It also has several photos from the period.

Sadly, for Evans, Miles Davis dropped in during one of these nights at Ronnie’s and later poached DeJohnette to replace Tony Williams in his group. So, this trio only lasted six months.

Fred Grand - 07 November 2021
If Esbjörn Svensson reinvigorated the piano trio format at the turn of the millennium, it’s fair to say that in more recent times a certain staleness has set in....