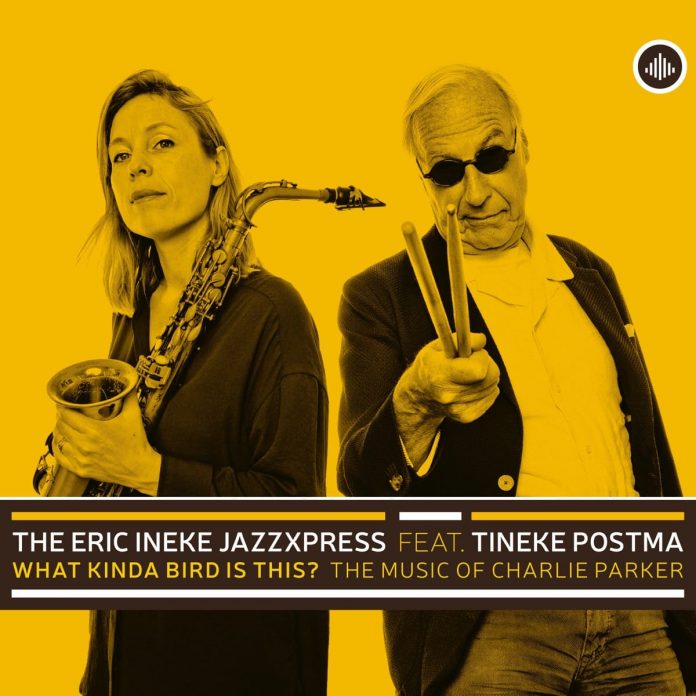 Tireless ambassador of hard bop. Mentor of myriad European young lions. Paterfamilias of the mainstream scene of The Hague. The 74-year-old Dutch drummer Eric Ineke, who has played with the likes of Dexter Gordon, Dizzy Gillespie and Hank Mobley, seems part of that special breed that gets more energetic the older it becomes.

The last few years Ineke has recorded with Dave Liebman and Doug Webb. He also functions as leader of the hard bop outfit The Eric Ineke JazzXPress. No less than seven albums have preceded its latest effort, What Kinda Bird Is This?, a fitting tribute to Charlie “Yardbird” Parker in 2020, the year in which the jazz world celebrated the 100th birthday of this towering giant of modern music.

The current line-up of The JazzXPress features rising star altoist Tineke Postma and the up-and-coming trumpeter Ian Cleaver, as well as members from the very beginning, bassist Marius Beets and tenor saxophonist Sjoerd Dijkhuizen. By absence of the temporarily ailing Rob van Bavel, Peter Beets and Ineke’s long-standing musical buddies Rein de Graaff and Rob Agerbeek are the pianists of choice. The unforeseen diversity of piano styles is the extra treat of a record that already brims with top-notch performances and surprising arrangements.

Tineke Postma’s portrait on the record sleeve next to Ineke is not coincidental. Ineke and the internationally acclaimed Postma have developed a mutually inspiring rapport. Among Postma’s angularly swinging contributions, her performances in the trio format stand out. Siamese twin-like interaction marks the concise and progressive reworking of Au Privave. As far as intensity goes, Lover man, the standard ballad that was once reshaped by Charlie Parker, on the verge of a nervous breakdown, into a confusing but unparalleled story of cutting-edge beauty, shows a wealth of ideas, off-beat timing and tuneful connecting phrases. The unforgettable feeling Postma gets across here is melancholia and heartburn.

Nifty arrangements by Marius Beets, Dijkhuizen and absentee Van Bavel give the soloists something to work with besides archetypical bop changes. Clearly the apogee, Relaxin’ At Camarillo, uncoiling mischievously like a snake through firm choruses of modality and various shadings of the melody and climaxing with Parker’s indelible long line, sounds like the sort of tune that would not have been out of place on Blakey’s Ugetsu. Sjoerd Dijkhuizen, a strong player in the tradition of Dexter Gordon and Hank Mobley, nails Birdie Num Num, Marius Beets’s variation on Parker’s Confirmation.

Trumpeter Ian Cleaver, playfully and fluently developing solo’s throughout, shows particular youthful abandon during Steeplechase, likely inspired by Peter Beets, who is the session’s virtuoso and florid pianist. All pianists swing hard. The semi-retired De Graaff exposes his typically long-lined extensions of Sonny Clark and Hampton Hawes. Agerbeek stresses the boogie factor of the blues. Ineke oozes sophistication and relentless swing, perfecting his style regardless of the fact that he has been playing bop for five decades now.

The inclusion of lesser-known Parker compositions such as Stupendous, Bongo Beep and Merry Go Round is yet another interesting aspect of What Kinda Bird Is This?, an excellent refurbishment of Parker in its own image by The Eric Ineke JazzXPress.

John White - 13 December 2020
I am reluctantly writing this at the request of our editor. A long-time admirer of Legrand’s jazz albums, I wrote his obituary for Jazz Journal. Although I requested this...

Emi Takada: Why Did I Choose You?