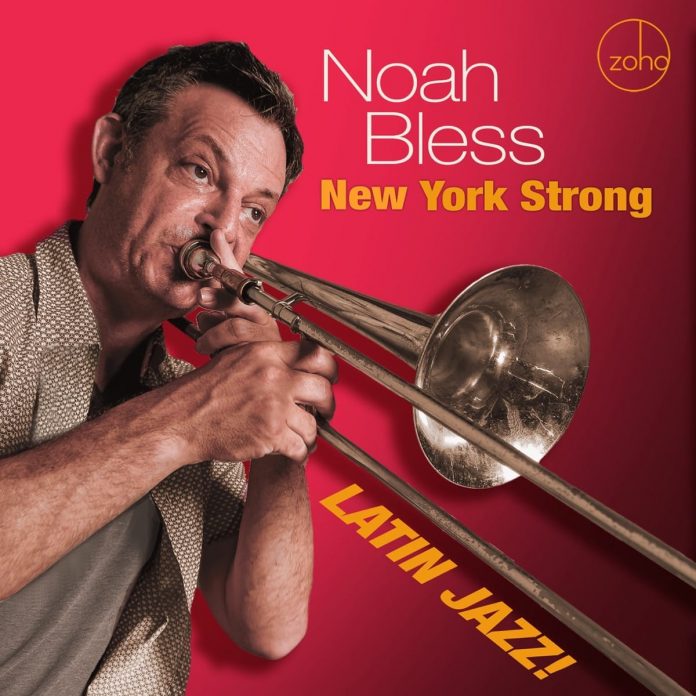 The publicist says “Having uplifted the music of many major artists, on New York Strong-Latin Jazz! Noah Bless is at last heard as a leader of his own ensemble, staking out his claim as one of the top trombonists in Latin jazz.” Bless certainly has an impressive resumé. He did a BA in performance at Cincinnati Conservatory of Music and has a master’s from Manhattan School of Music; since moving to New York in 1990 he has played on over 50 albums, some featuring such notables as Paquito D’Rivera, Mario Bauza, Don Braden and Celia Cruz. He’s also worked with the Lincoln Center Afro-Cuban Jazz Orchestra, the Vanguard Jazz Orchestra, the Spanish Harlem Orchestra, the Kamikaze Ground Crew, Willie Colon and Eddie Palmieri. Enviable credentials, and this set has the stamp of quality. It’s sound, solidly played Latin-inflected jazz – not Spanish Fania style – but well-played jazz mostly with a Latin beat.

Oddly though, it starts with something, Chasing Normal, that sounds more like a Bob James composition than Latin. Pleasant, but low intensity. The soloing is good though, from Bless and impressively, in fourthy McCoy mode, from pianist Mike Eckroth. Next up, Ganga, moves more in the direction of the title with a tasty montuno over which Bless layers his lyrical, melodic trombone. He’s not a mega-virtuoso, but fine and creative. Eckroth is again right on top of his material, very impressive. Eckroth moves to the electric piano for Jobim’s Canto, another one right within the ambit of the title. The rhythm section show their consistency here, flawlessly tuned into composition and arrangement. We get another treat from Eckroth, flowing with easy chromaticism over the changes, and a bass solo as one from the leader. Yes, he’s not a Conrad Herwig but has a melodic gift, which is the best place to start.

Things get tense with 49th Street, a technically challenging, angular, rather atonal theme by Bill Mobley. The theme lasts half the piece then oddly gives way to a tonal jazz-standard type sequence for solos by Bless and Eckroth. The theme returns, quite reasonably abbreviated, to close. Ligia’s the opposite, an undulating ballad, well programmed in this spot. The Key opens in two-time, threatening to swing, but within half a minute it’s into Latin before dropping back into two. The two rhythms alternate throughout, with brisk 4/4 swing indeed emerging eventually, if briefly. The group synthesize the stylistic schizophrenia well – such intricacies are well within their capabilities. James Taylor’s Fire And Rain is a pleasant old folk-rocker laid over 6/8, and suits Bless’s melodic proclivities. A reading of Ray Santos’s Sunny Ray with its bridge section and solo passages in 7/4 leaves us on the right note, right in the Latin groove, with good solos from Bless and Eckroth.

Altogether, another quality production from Zoho, who can be relied on for solid post-bop material. There’s also an informative note from Bill Milkowski, including interview material with Bless. I did find myself wondering why it all went so quickly – well, it’s enjoyable and it does indeed come up short of 40 minutes … enough to get across a strong NY message.

Fred Grand - 09 September 2021
One of the most welcome life-hacks of recent times has been the proliferation of live streaming. Whatever the shortcomings of the medium, it has offered artists a much needed...

Jazz Journal - 31 December 2019
The detail that the S.M.E. Big Band bring to the simple march tune, Lets Sing For Him is remarkable. The voices and horns ebb and flow in polyphonic tides...