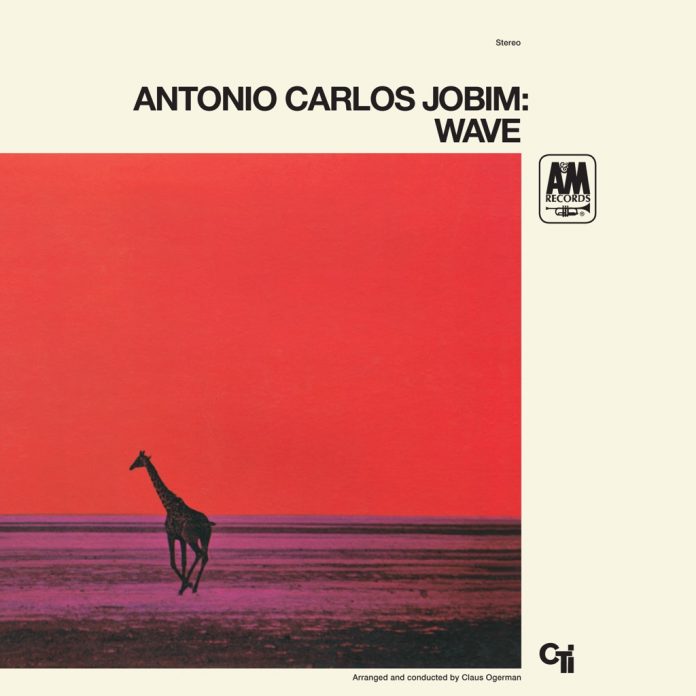 First released in 1967, Wave was a considerable addition to the world of bossa nova and jazz. Jobim had incorporated the orchestra in all of his studio albums, blending samba rhythms and instrumentation to create cool, laidback but complex soundscapes. Wave was his fifth release, and with a full string section of violins and cellos, as well as brass and woodwind, the arrangements are lush and expansive.

Wave is filled with high-calibre musicians, many of whom, if not already celebrated, would go on to have exceptional careers. Bassist Ron Carter, whose recording credits are in the thousands and include Roy Ayers and George Benson, features throughout Wave, with a notable moment being his rhythmic fills on the second track The Red Blouse.

Three drummers are given credit in the liner notes, although it was Claudio Slon alone who played the actual drum kit. Nonetheless, the remaining two percussionists, Bobby Rosengarden and Dom Um Romão, are still titans in their own right, with the former having played with Duke Ellington and Quincy Jones and the latter with Cannonball Adderley and Tony Bennett. While reserved throughout, they do stand out at times, particularly on the final track Captain Bacardi, which contains a series of rhythmic variations over a repeated melody.

Other notable musicians on the album are the trombonists Jimmy Cleveland, who played on Miles Davis’ Miles Ahead, and Urbie Green, who recorded with Dizzy Gillespie and Count Basie. Not only a composer and instrumentalist, Jobim provides vocals on Lamento, singing evenly and quietly and also playing the intermittent piano motifs, as well as harpsichord on the following track, Antigua.

For fans of bossa nova, this is an essential album, and although the format and style is now well known, imitated many times over, at the time it was a very modern and sophisticated album.

The album is released under licence from Universal Music by Elemental Music, who are a label focused solely on rereleasing out of print albums, mainly jazz. The vinyl itself is a limited edition 180-gram record, and is nicely packaged in a gatefold sleeve, with commentaries by lyricist Norman Gimbel and journalist George Frazier IV, as well as a full list of musicians.

For this edition, photographer Pete Turner’s album cover of a running giraffe is in a saturated red and purple, as was the original, though some may have noticed that through the 80s and 90s it was released in green and blue. The significance of this album in the timeline of jazz alone makes it worth listening to, and this vinyl rerelease is a good place to start.

Michael Tucker - 28 January 2022
Born in 1981 in Silkeborg, Denmark– a town noted in recent art history for its association with the late painter Asger Jorn, whose museum is housed there – the...

Jazz Journal - 30 January 2022
To the ear trained exclusively in tradi­tional harmony, Taylor's music might seem chaotic and confusing; it is unashamedly atonal and metrically uninhibited, frequently brash and unsenti­mental. Even more than...