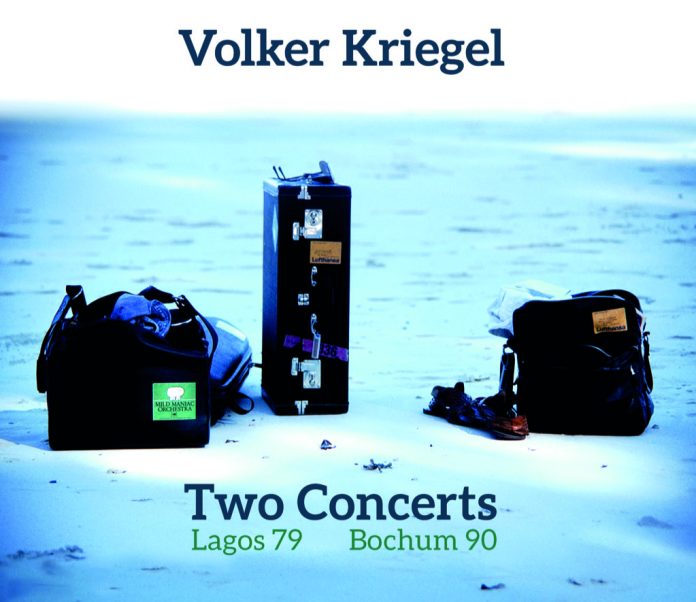 Volker Kriegel, who died far too young in 2003 aged just 59, was well-known in his native Germany and across Europe. Yet globally he was perhaps less feted than some of his jazz-rock guitar contemporaries. However, he was undoubtedly prodigiously talented and his career was launched as a sideman with The Dave Pike Set. He was later a mainstay of the United Jazz And Rock Ensemble throughout the near three decades of its existence. The mercurial fluidity and crisp tone of Kriegel’s guitar work is reminiscent of the late Larry Coryell and no more so than on numbers like the opener Hot Nuts on Live In Lagos. The precision playing here positively evokes memories of Coryell’s Eleventh House in its prime.

There are some lengthy numbers here including his own Elastic Menu (from the album Elastic Menu, MPS, 1978) spanning nearly 24 minutes. The repertoire varies from subtle Milesian In A Silent Way passages to raucous funk. The recording of this Nigerian concert is of stereo broadcast quality and offers a rare opportunity to hear Kriegel make band announcements in perfect English and a surprisingly sonorous voice. The final two numbers on CD1 are jams, the first featuring guest flautist Tee Mac and the second with Mac and King Sunny Adé and unidentified local musicians.

The second CD, Live In Bochum, was recorded a decade later. If anything it’s a little less flamboyant than the African gig but certainly no less engaging or impressive. Another factor here is that since the septet of the first concert is now pared down into a quintet, there’s more opportunity to hear Kriegel’s lithe, imaginative playing. From the first band he’s joined here by Thomas Bettermann on keyboards. There’s also saxophonist Christof Lauer on tenor, a fellow member of the UJRE, who plays some gutsy solos, as heard on Palazzo Blue, for example.

This double album is gleaned from Kriegel’s private audio-tape archive. The first set was the result of his Mild Maniac Orchestra being given the opportunity to tour for seven weeks in 11 East and West African countries in early 1979. Out of some 30 hours of concert recordings on 15 tapes, two Lagos concerts, featured here, were ultimately selected. The second CD featured Kriegel’s new and final band, which played together from 1987 to 1993 and had up until now only been documented on one studio album, Palazzo Blue (Mood, 1987) from which the title track is featured here in a near 25-minute format. All this only goes to reinforce the fact that any releases by this much missed jazz-rock virtuoso are to be enthusiastically welcomed and this one is no exception.