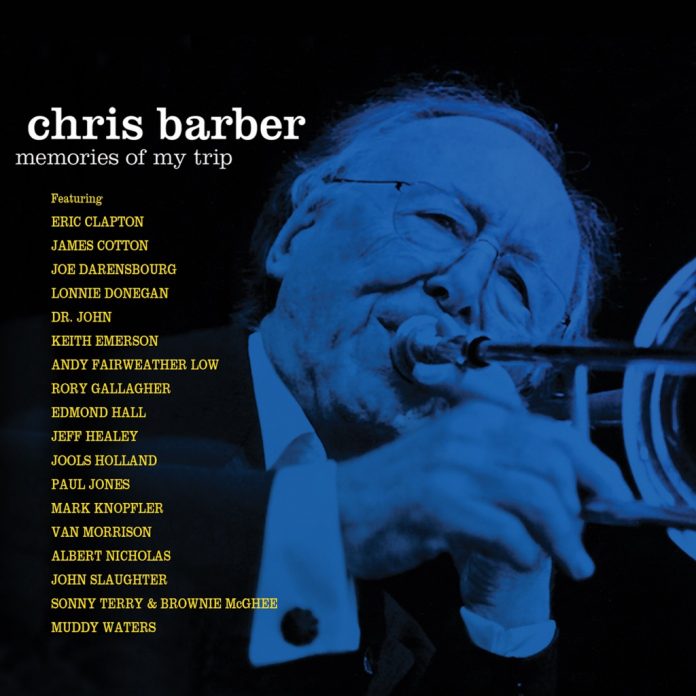 Chris recently announced his retirement, well earned after 70+ years of playing and band leading. This reissued two-CD album, originally put together in 2010, is a tribute to his long and successful career. Spanning 1958-2010, and focusing on Chris himself, it makes numerous stops along his musical road, sampling a wide range of sometimes surprisingly eclectic collaborations with celebrities of jazz, blues, gospel and blues-rock.

Back in 1954, the hugely popular Barber band established a fresh new sound in British traditional jazz, providing a six-piece piano less template with New Orleans roots for legions of bands who were to spring up everywhere, bulking out the ensuing “trad boom”. But Chris was no stick-in-the-mud. Astute, organising and always willing to learn and adapt, he developed a particular interest in blues and gospel, with Ellington a recurring source of inspiration in Barber’s repertoire and arrangements. Whilst maintaining throughout his career an affinity with New Orleans music, he moved on with the times as the trad boom faded, experimenting with repertoire and adding saxophones and electric guitar (whilst unusually, retaining the banjo, and not recruiting a pianist).

The well-produced liner booklet contains Chris’s comments on each track in conversation with Alyn Shipton in 2010. In a collection of widely varied collaborations, some quite rare, Chris acquits himself with panache on all tracks with all comers, including a couple of positive performances on bass.

In the opening tracks of CD1 with Sonny Terry and Brownie McGhee, Do Love, Do Remember Me, captures the infectiously bouncy drive of the early Barber band in 1958. Not in chronological order, legends of blues, rock and gospel who then line the road through the years include Eric Clapton, Muddy Waters, James Cotton, Rory Gallagher, Lonnie Donegan, Dr. John, Van Morrison and Alex Bradford.

Chris can be proud of these ground-breaking and no doubt enlightening encounters. A parallel trip through his own band’s development, from Bobby Shaftoe to Battersea Rain Dance and beyond to his big band performances, would make a very worthwhile companion album.

Click here for information on how to buy Chris Barber: Memories Of My Trip

Steve Voce - 24 October 2020
Frémeaux’s excellent series of concert performances in Paris includes a double CD by Quincy’s band of 1960. This one by Quincy in 1961 has been available in France for...