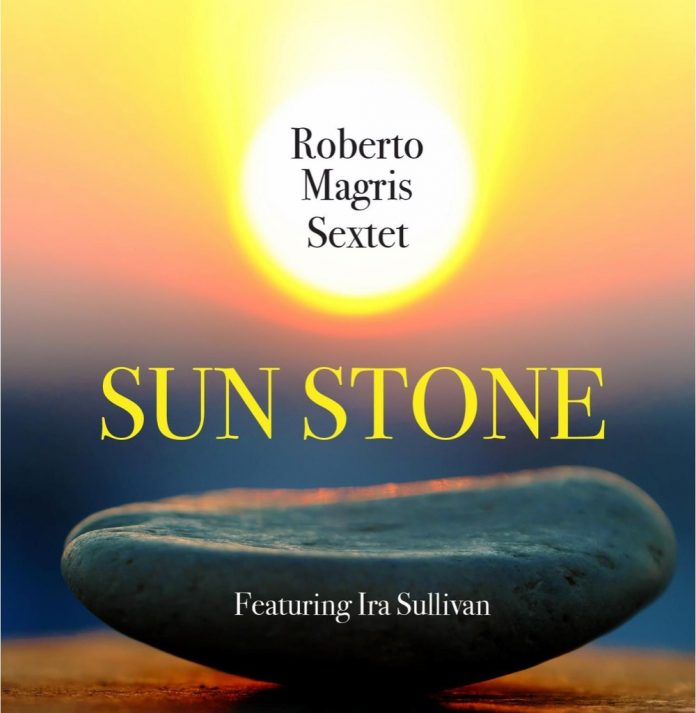 A return to Miami for Roberto Magris, but this time to make a studio recording for the ever-loyal JMood label. If your paradigm of jazz is themes-and-solos, then this one will be meat and drink. If you prefer a more thoroughgoing approach, there are other Magris albums for you. The delight here is the interplay of veteran Ira Sullivan and another Chicago homeboy Mark Colby; Miami-based Shareef Clayton will be less well known, but he gets a tight, fat sound out of the trumpet that might owe something to Nat Adderley’s cornet. The bass and drums axis is solidly manned by Jamie Ousley and the Costa Rica-born Roberto Zuniga, who for my money is one of the most underrated drummers in the field.

They open with Sun Stone in three, with Colby prominent and then a strong solo from the 88-year-old Sullivan. There’s a reprise of this fine original at the end. Magris plays with a smile on his face, and his inclusion of Innamorati A Milano, a pop song of the 60s which I know from the Ornella Vanoni version (she must be of an age with Ira), is a gentle nod to younger days.

Planet Of Love is a full-on waltz which sees Sullivan switch to flute, but gives Magris perhaps his best solo feature of the set, full of stretched, yearning phrases and soft rhythmic shuffles. He gets a similarly romantic feel on his Beauty Is Forever, which Sullivan sits out. The highlight of the date, apart from the title track, is Look At The Stars. Sullivan’s soprano finds the mid-point between Bechet and Wayne Shorter and just sits there, stargazing, with just a brief meteor flash from Clayton to illuminate the night sky.

It’s another great set from Magris, who doesn’t seem to put a foot wrong when JMood call him in. I’m having a small “moment” with this approach to jazz, preferring a less Buggins’ format, but it’s exciting music and the solos are uniformly energetic and moving.

Thomas Fletcher - 25 April 2020
“An instrumentality that connects. The process of bringing ideas or events together in memory or imagination”. This rather poetic statement sits alongside the album title reminding us what the...