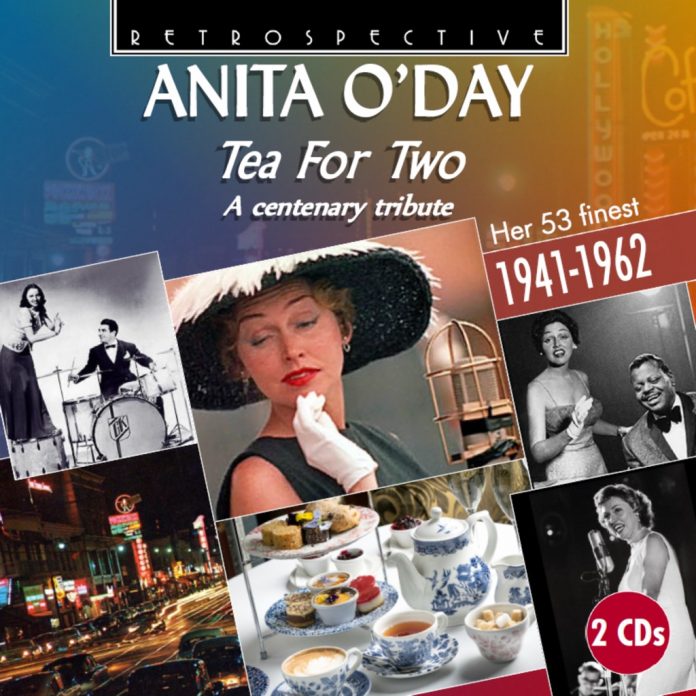 This two-CD set is a centenary tribute, 53 tracks with a detailed booklet, released to coincide with the late singer’s birthday, 18 October 1919.

As Richard Cook and Brian Morton say in their Penguin Guide, “Anita O’Day lived the jazz life”, making reference to the graphic account in High Times/Hard Times. She produced a large amount of recordings and this set would be a fine accompaniment to her book as it covers her career from when she developed her talent in the Gene Krupa Band in the early 40s (and her work with Roy Eldridge) to the highly successful association with Norman Granz in the 1950s and into the following decade.

The material shows her range of styles – from the swing of Let Me Off Uptown, Bolero At The Savoy and Opus One through to bebop (How High The Moon; No Soap, No Hope Blues), ballads (Skylark; A Nightingale Sang; Bewitched, Bothered & Bewildered), more commercial titles (And Her Tears Flowed Like Wine; Tennessee Waltz; Jamaica Mon; Peanut Vendor), and those irrevocably linked with her (Sweet Georgia Brown; Tea For Two), where the song is deconstructed, then rebuilt with quotes, shifts of rhythm and changes in tempo (and of course popularised in the Jazz On A Summer’s Day film).

It’s good that her close friend of many years, drummer John Poole, is included on some of the tracks (though not always credited), the close relationship they established between vocals and percussion illustrated on Tea For Two from Live at Mr. Kelly’s.

There are glimpses of the collaborations with the big arrangers – Kenton, Bregman, Paich, May, Mandel and so forth, and several that show her at her best with smaller groups, the ones with Oscar Peterson in particular, though apparently she had reservations about these, and a couple from the 1961 album Trav’lin’ Light, with Ben Webster. A good representation of Ms. O’Day’s work over the two decades.

Discography
CD1 [1941-1955]: Alreet; Georgia On My Mind; Just A Little Bit South Of North Carolina; Slow Down; Let Me Off Uptown;Skylark; Bolero At The Savoy; Thanks For The Boogie Ride; That’s What You Think; Ain’t Misbehavin’; And Her Tears Flowed Like Wine; Gotta Be Gettin’; Are You Livin’, Old Man?; Memories Of You; Opus One; Boogie Blues; What Is This Thing Called Love?; How High The Moon; Jamaica Mon; Tennessee Waltz; Lover, Come Back To Me; Love For Sale; No Soap, No Hope Blues; Just One Of Those Things; Fine And Dandy; A Nightingale Sang In Berkeley Square; No Moon At All (78.45)
CD2 [1955-1962]: Honeysuckle Rose; Don’t Be That Way; Pick Yourself Up; Stars Fell On Alabama; Stompin’ At The Savoy; Sweet Georgia Brown; Old Devil Moon; Tenderly; We’ll Be Together Again; Stella By Starlight; Them There Eyes; Bewitched, Bothered And Bewildered; The Peanut Vendor; Take The “A” Train; Early Autumn; Tea For Two; All Of You; Easy Come, Easy Go; Johnny One Note; Trav’lin’ Light; Remember?; What A Little Moonlight Can Do; Night Bird; Do Nothin’ Till You Hear From Me; Peel Me A Grape; Thanks For The Memory (79.46)
O’Day (v) with various bands inc. Gene Krupa, Nat King Cole, Stan Kenton, Buddy Bregman, Oscar Peterson etc. 1941-1962.
Retrospective RTS 4360

Matthew Wright - 26 August 2020
There have been compositions in jazz dedicated to members of musicians’ families, often children or parents, but the theme of this album concerns an area of life seldom covered...