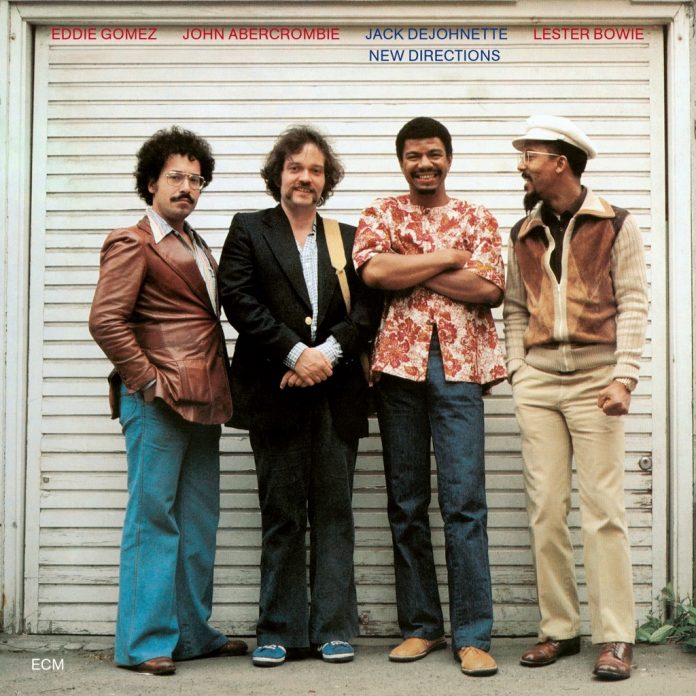 Before you get to the music, one glance at the cover shot for this record –  which shows DeJohnette, Eddie Gomez, John Abercrombie and Lester Bowie casually assembled against an old garage door dressed like extras from Starsky & Hutch – you might be forgiven for thinking the album’s title lends itself more to the group’s loud, funky image than the simple renaming of the band (called Directions) DeJohnette formed in 1975.

Recorded live in a studio in Oslo and lauded on its release in 1978, New Directions could just as easily be referencing the five long tracks that make up this long out of print LP. It’s a challenging record at times, but one that, on vibe alone, stands out as one of DeJohnette’s most impressive as a leader. In fact, during an interview with a popular US drum magazine in 2017, DeJohnette himself listed the disc as one of his personal favourites recorded for ECM label – up there with the two classic Gateway records (made with Abercrombie and Dave Holland), the first Special Edition set (featuring David Murray, Arthur Blythe and Peter Warren) and New Directions In Europe, the follow-up release to this one featuring the same line-up appearing here.

The record is announced with a wash of cymbals, tom toms, electric guitar bends, the deep drone of sustained double bass and some echoey, Miles-like trumpet trills, all of which quickly capture the mood of the music and the unique chemistry of this great band. Melodically, like much of the material in this set, opener Bayou Fever is loose and free-floating, up until an abrupt shift in groove drags the whole band into a steadier pulse and a new section more noticeably marked by swing. Blowing through some intense dialog between bass and drums here, Bowie remains serene through the storm, his lines lyrical, less doodly and at times stylistically reminiscent of  flamenco.

Another DeJohnette original, Where Or Wayne has more repose and is rhythmically less cluttered. The track features dynamic, Latin-licked drumming, a strong, melodic solo from Gomez and some inspired fretwork from Abercrombie, who’s playing here is fluid, adventurous and upfront, as opposed to limp and lost in the back of the mix as it appears to be through much of the album.

The airy ambience of Dream Stalker has DeJohnette in mostly decorative mode, lifting the mood with cymbal rolls and light fills around the kit. More frantically, his fierce, funky and expressive side is stressed through the sprawling, 11-minute long One Handed Woman, and there is a great moment, seven minutes in, in which he skillfully slides a slick backbeat under some wavering cymbal work to mark out a funky shuffle groove with Gomez at the helm.

Another highlight of this set is DeJohnette’s emotive piano playing on the closing track Silver Hollow. It’s a stunning piece bright with a buttery bass figure, light harmonic pings on guitar and Bowie’s horn sailing over calm orchestration. It’s also an appropriate finale for an album as stylistically stretched as this, a DeJohnnette disc bettered only by a bootleg tape of this same band in Portland hiding on Youtube, or the funkier, sax-led Cosmic Chicken from 1975, still criminally awaiting resurrection on CD.

Steve Voce - 26 June 2019
It was perhaps easier for the new jazz listener to come to bebop than for the one already steeped in Armstrong and Ellington. There were several methods to help...