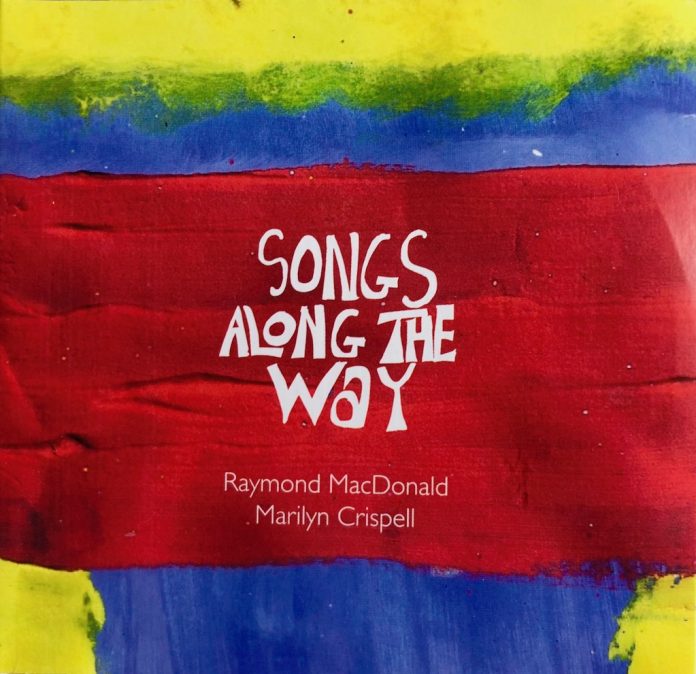 I’ve long been an admirer of Crispell but confess I have heard little of MacDonald apart from some work with the Glasgow Improvisers Orchestra, which he co-founded. This duo released a previous album, Parallel Moments, in early 2014. Songs Along The Way was recorded later that year but this is, as far as I know, its first release.

Several of the tune titles suggest that the pair drew inspiration from various landscapes and places. There is a beguilingly pastoral quality to some of the music (there’s even a strong hint of Greensleeves in The Gallery) with both players waxing intensely lyrical on tracks like Why I Missed Cole Porter and Foresee, but there is no shortage of tumultuous, impassioned playing either. Both modes are impressive, poignant or rousing as appropriate.

The two consummate improvisers work well together, clearly enjoying each other’s inspiration. My only slight quibble is that MacDonald tends to intensify emotion on some of the more reflective tracks (e.g. All The Songs Above Your Head) by climaxing with passages of torrential abstraction, rather than digging deeper into the affecting and often soulful mood he and Crispell have built up. He’s certainly capable of that, too.

All a matter of taste, of course, and there can be no doubt that he is a highly accomplished and resourceful player with a distinctive sound, a fitting partner to the splendid Crispell. His solo opening passage on the 13-minute Vortex is a tour de force of technique and cogent development.

Discography
All The Songs Above Your Head; Roundabout; Why I Missed Cole Porter; Beach At Newquay; Foresee; Vortex; We Are Going; Neolithic; Stars; Across The Reservoir; The Gallery (59.17)
MacDonald (ss, as); Crispell (p). The Vortex, London, 6 December 2013 & Woodstock, New York, 1 October 2014.
Babel BDV 17149

Barry Witherden - 15 June 2020
Apart from the wholly instrumental Endure each of the songs here has sprung from lyrics by poets Malika Booker (the first poet-in-residence for the Royal Shakespeare Company amongst other...