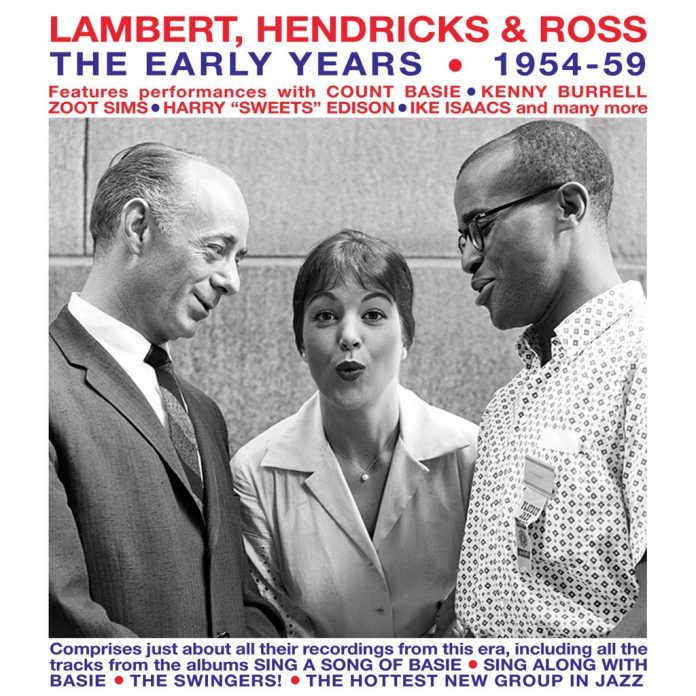 This new set from Acrobat collects four albums – Sing A Song Of Basie, Sing Along With Basie (the latter with the full Basie band), The Swingers and The Hottest New Group In Jazz, in fact the same four as on Avid’s Four Classic Albums.

The idea of “instrumental singing” – 100% recreations of instrumental performances, seems to have evolved from King Pleasure through Annie Ross and on to Eddie Jefferson. The style demanded a commando course from the vocalists and only the most comprehensively gifted could attempt it. Here, too, overdubbing is used by the three singers. The dog-on-its hind-legs analogy applies, and there was never a need for such musical photo-copying.

The absence of a need doesn’t mean that the form is not enjoyable in its own right. Basie’s music was particularly suited to such interpretation, and it is the two albums of the Count’s music that succeed best. Not far behind is The Swingers, which includes a rampant Zoot Sims. Basie’s drummer Sonny Payne and his bassist Eddie Jones are on three of the albums, and combine into a perfect accompanying trio with pianist Nat Pierce, himself a virtual Basie-ite, whilst Harry Edison, adding his obbligati to The Hottest New Group, is a real one. The Hottest New Group album is the most representative, with standard jazz classics like Moanin’, Centrepiece and Twisted, the Annie Ross classic. But it is also home to Hendricks’s raucous classic Gimme That Wine (“I can’t get well without Muscatel!”). The attempt at Bill Harris’s Bijou is a rare failure.

Hendricks’s individual mastery marks him as one of the great jazz singers, and Annie Ross’s dextrous, inspired and often unbelievable abilities are quite breathtaking. This kind of singing is lost to contemporary jazz, but then so is this kind of swinging. Confirmation of the trio’s watermark is given here when they perform with the 1958 Basie band supplemented by Joe Williams and are not found wanting – indeed Annie’s spiked trumpet high notes resonate with those of Messrs Newman, Young and Culley in the flesh.

It is not the fault of these superb artists that the limitations of their form mean that this is not a set one would play end-to-end at one sitting. But it’s an excellent reference to dip into for half an hour at a time.

Gordon Jack - 06 October 2021
I never thought I would say this about any recording from the great Stan Getz but these insignificant trifles are unlikely to be of interest to the well-informed readers...