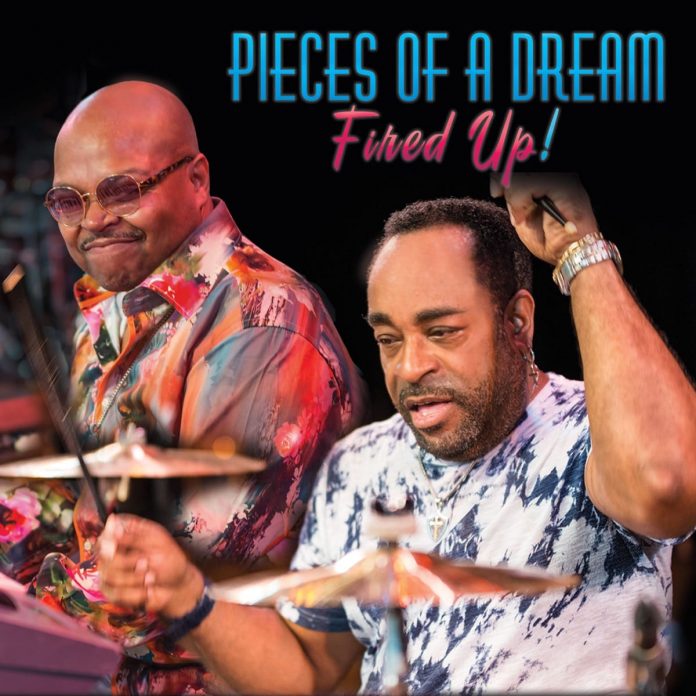 Fusing jazz, R&B, pop, funk and blues, Pieces Of A Dream are back and eager to share their love of performing after a year and a half of standstill for the arts. Aptly titled Fired Up!, the new album summarises the happiness and relief of a return to live music performance. Pieces Of A Dream appear raring to go as they approach their 45th anniversary. Generally uptempo and soul-warming, the songs make you feel good. I imagine they sound even better now being performed live as they embark on tour.

The memorable melodic lines of Feelin’ Good create a reminiscent sound world of Earth Wind & Fire, with whom they have appeared live. The sensual, Latin-style classical guitar solos juxtaposed with the piano interludes in this track illustrate the fusion approach. It was written by drummer Curtis Harmon, along with Just Do It!, Livin’ The Life and In Too Deep. Harmon, bassist Cedric Napoleon and pianist James Lloyd founded the group in Philadelphia when they were teenagers. Their care-free youthfulness still appears present on this album.

Going Home begins with an ethereal effect, influenced by the highly electronic instrumentation before easing into a jazz soundworld created through a strong rhythmic pulse and improvisatory sections on the piano. The piece is well executed, with all parts performed by James Lloyd.

A funk and natural groove is established in Livin’ The Life through the employment of synthesiser to create a 70s and 80s feel that is still relevant today. Pianist James Lloyd has said that their aim is to make people feel good, “touch, heal, energize, and help people release”, and I think the album does exactly that. A fun, funky album which most certainly ought to get you fired up.

Matthew Wright - 21 April 2019
Although this three-CD box set is under the name of Francoise Hardy, most of the material is by the French guitarist Sacha Distel, recorded before he became an international...