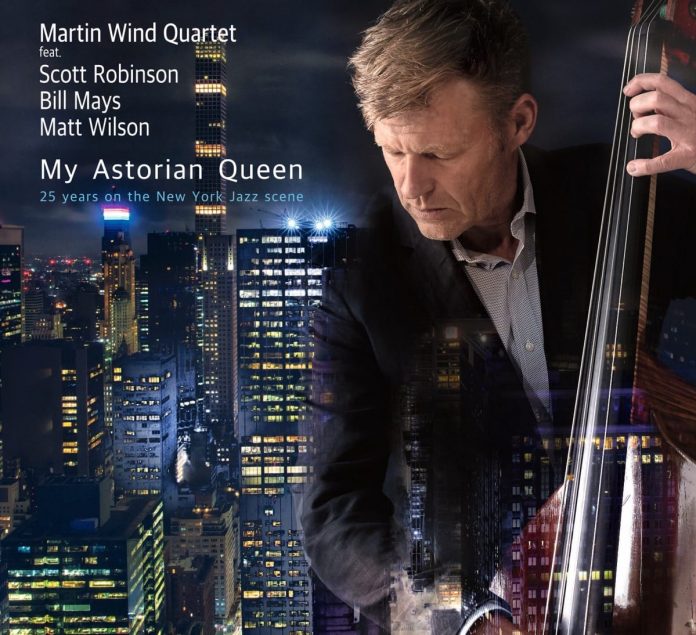 This album celebrates bassist Martin Wind’s quarter century since he arrived in the Big Apple from Germany in 1996. It’s a thank you to the musicians who welcomed him and also a homage to his wife whom he met on his second day there. Her small apartment was in Astoria, Queens – hence the title.

The album’s opener is a swinging version of Thad Jones’s Mean What You Say. After May’s slick piano intro Robinson solos on laid-back trumpet and then urgent tenor. Wind often covered this number when he played in the Vanguard Jazz Orchestra (formerly the Mel Lewis / Thad Jones Big Band). His reflective composition, Solitude, was penned during lockdown and has Robinson on soulful clarinet. The latter’s spirited bass sax features strongly in Broadway. Next, by way of contrast, May’s lyrical Peace Waltz has arco bass gently duetting with piano. It brings to mind Bill Evans’s Peace Piece and has distinct hints of Bobby Scott’s A Taste Of Honey.

È Preciso Perdoar (translated as “one must forgive”) is a reworking of the celebrated Brazilian song made famous by Getz and Gilberto. Out In P.A. recalls a visit to May’s Pennsylvania home by Wind and his soon-to-be wife. It’s followed by the title track with the bassist leading the melody. Gershwin’s There’s A Boat That’s Leaving Soon For New York is relaxed with mellifluous trumpet and the album closes with a measured take of New York, New York delivered by Wind with just Wilson on drums.

This album is top-drawer jazz. The band is a class act and the sound quality is superlative.